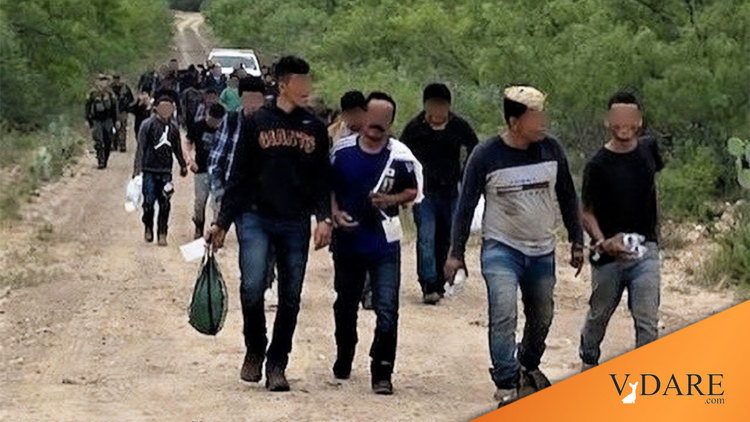 Breitbart has a report that half a million illegals got past the Border Patrol and were never registered [2021: 1.9M Migrants Apprehended Along Southwest Border, 500K ‘Got Aways,’ by Bob Price and Randy Clark, December 2021].

The figure of 500,000 gotaways is just an educated guess.  Because so many Agents are trapped inside on diaper duty, the number could be far higher.

An amusing story: I once talked to an Agent who got the assignment to calculate how many gotaways were happening at his station in Arizona.  He went to the drag road—a road that had been smoothed down artificially to show sign—and started counting footprints aka sign cutting.

He took the number of footprints he found and compared it to how many illegal aliens the station actually caught that day.  The difference was obviously the illegal aliens who had not been apprehended or were "gotaways."

He submitted his report and his report went up the chain of command, eventually to Border Patrol Headquarters in D.C.  Word wound back down from HQ saying "Justify it," meaning justify the number of aliens calculated to have gotten away.  The Agent who had been assigned originally was assigned again.  He hadn't taken notes the previous time, but this time he made a more formal report showing his calculations.  Once again, the report wound its way up the chain of command, eventually going to D.C.  Word filtered back from HQ, "Do the report again.  This time get somebody else to do it."

Everyone knew what that meant.  The number was too high and it was embarrassing to the Border Patrol if it was true.  Hence, HQ wanted to be given a lower number.  The truth be damned.  "Tell us what we want to hear."