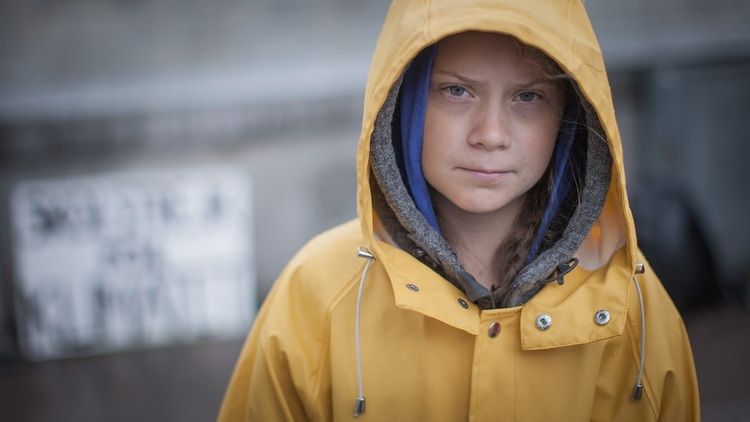 See, earlier, by Lance Welton: Why Teenage Climate Crusader Greta Thunberg Is A “Watermelon”—And Why She May Change

Back in April, I wrote an article  about Swedish teenage climate campaigner Greta Thunberg in which I noted her Autism Spectrum Disorder, extreme anxiety, and dismorphic face, possibly a product of partial Fetal Alcohol Syndrome, as this would most neatly explain all her symptoms, including what appears to be delayed puberty.

Since then, Greta has risen to prominence to the USA, in particular due to her publicity stunt two-week voyage to America in a “zero carbon” environmentally friendly boat—completely in vain because a crew of five will be flown to New York to bring the boat back to Europe. Greta’s rise to international fame has resulted in her and her allies criticizing those who draw attention to her peculiar behavior and looks, branding them “haters”:

I'm not public about my diagnosis to "hide" behind it, but because I know many ignorant people still see it as an "illness", or something negative. And believe me, my diagnosis has limited me before. >

‘“When haters go after your looks and differences, it means they have nowhere left to go,” said 16-year-old climate activist. "And then you know you're winning!”’ [Attacks on Greta Thunberg, Say Allies, Show Just How 'Terrified' Reactionary Forces Have Become of Global Climate Movement, by Jon Queally, Common Dreams, September 2, 2019]

The Leftists doth protest too much, me thinks. Apparently, those who point out that it might not be a good idea to blindly follow a child, whose prefrontal lobes are yet to fully develop, and who, as an autistic, has severe blind spots in terms of her ability to think about the world, are “bullies.” [Given Greta Thunberg’s Bullying, Is It Any Wonder So Few Women Share That They're Autistic?, by Ellen Jones, Huff Post, September 2, 2019] Naturally, if allegations are demonstrably wrong, you throw emotional terms at people—such as “bully”—rather than simply disprove them…

I predicted in April that Multiculturalists would exploit this naïve, vulnerable girl, but even I didn’t think it would go quite this far. But, even so, I’m pretty sure VDARE was one of the first US outlets to draw attention to this and correctly predict what would happen. You’re either with Virginia Dare or you’re behind her.