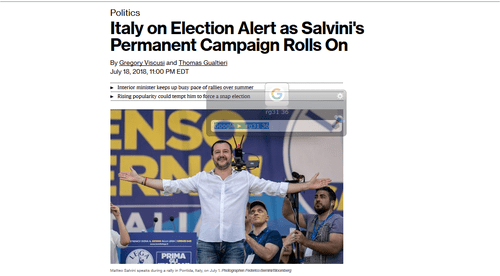 The model for nationalists worldwide is the Italian government, specifically how Interior Minister Matteo Salvini of Lega is conducting himself. He is launching what is essentially a permanent campaign, hosting rallies constantly, and hammering on the need to put the Italian government's resources at the service of the Italian people, not foreigners.

Even journalists they can't deny its effectiveness.

Last Saturday he [Salvini] was demanding lower taxes and better pensions at a League festival near Verona. On Sunday he was in Moscow to root against France at the World Cup final. Monday saw complaints about foreigners taking Italians’ jobs at an Adriatic resort. Tuesday he was bragging about a mafia crackdown and on Wednesday he met Egyptian President Abdel-Fattah El-Sisi in Cairo. Everywhere he spoke to cameras and tweeted.

In theory Italy isn’t due an election for another five years. But Salvini’s perpetual motion, his disregard for the limits of his interior ministry brief, and his soaring popularity risk destabilizing his uncomfortable alliance with the heterogenous-but-more-leftist Five Star. Polls suggest a snap election could make Salvini prime minister.

“Populism needs permanent electoral campaigning, especially when it is not able to produce concrete policies,” said Massimiliano Panarari, a professor in the School of Government at Luiss University in Rome. “Salvini is also using it as a kind of training to be ready to face new elections at anytime.”

President Trump needs to get back to this approach, hosting campaign rallies and rebuilding his MAGA movement. The current strategy of complacenty tweeting out unemployment statistics for blacks and Hispanics doesn't seem to be doing the GOP any good in the polls [What some early, high-quality polls can tell us about the race for the House, by Nathaniel Rakich and Dhrumil Mehta, FiveThirtyEight, July 20, 2018].

Neither Trump nor Salvini are regular politicans who can simply coast on their time in power and expect to triumph. They are political insurgents and need to act as such. Salvini gets this. Trump does not. The energy is on the Left and time is running out for the sleepwalkers in the GOP and the White House.