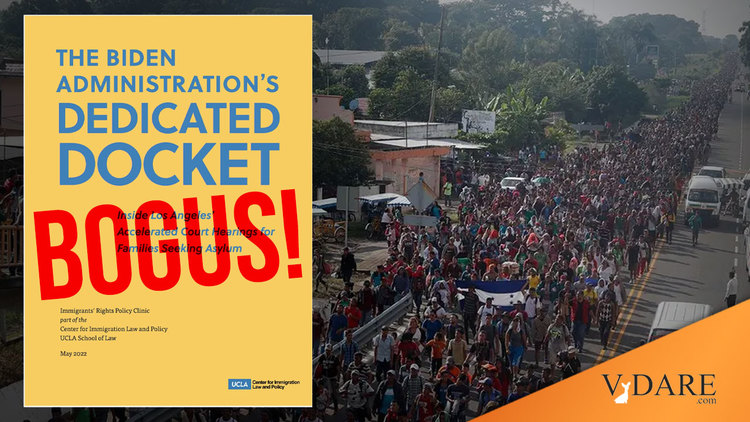 When POTUS 45 Trump created his Migrant Protection Protocols that required “migrants” to wait in Mexico while U.S. officials processed their asylum claims, we learned that 90 percent of the claims were bogus. The real number today is almost 100 percent.

NEW: Report released today reveals gross miscarriages of justice in the sped-up immigration proceedings the Biden administration established for families seeking asylum, including deportation orders against 150 children who never had their day in court. https://t.co/uC7FK1o7UT🧵 pic.twitter.com/Ub1MqLtDP5

“In May 2021, the Biden administration started the Dedicated Dockets program as a fast-track asylum process that promises to get border crossers through federal immigration courts within 300 days,” as Breibart explained in a report about data from the University of California, Los Angeles:

[I]n the city’s Dedicated Dockets program, just one percent of border crossers are found to have valid claims for asylum.

The bombshell data comes as the Biden administration has deployed an expansive Catch and Release network where more than 954,000 border crossers and illegal aliens have been released into the U.S. interior from February 2021 to April 2022.

That 99 percent exceeds numbers reported by the Trump Administration and other sources, which were anywhere from 80-90 percent.

Of course, the communists at UCLA don’t explain the numbers quite the way Breitbart did.

Here’s how UCLA put it [New Report Finds Children Ordered Deported, Families Without Lawyers, and Other Gross Miscarriages of Justice on the Biden Administration's Dedicated Docket, Law.UCLA.edu, May 25, 2022]:

A report released today reveals gross miscarriages of justice in the expedited immigration court docket established by the Biden administration for families seeking asylum, including the deportation of several hundred children who never had their day in court. …

Boo hoo. A deportation order, as we know, does not mean an illegal alien has been deported.

Breitbart also reported that the regime is deporting just 1 percent of the illegals intercepted at the border.

The only injustice in the “Dedicated Dockets” program is the one inflicted upon the Historic American Nation, which Brandon and his communist gang are trying to dispossess and replace.