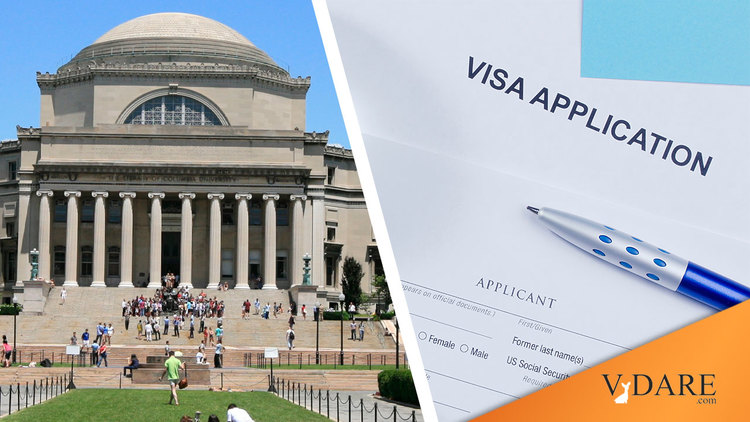 A too-little discussed aspect of the National Question is the more than 1 million foreign “students” who attend American colleges, and are permitted to run thither and yon anywhere they wish. Well, a top official at Columbia University has given good reason to discuss it. She has sued the Ivy League school because it fired her for refusing to participate in visa fraud on behalf of the foreign students, some of whom are up to no good.

Yocasta Brens was the top designated school official (DSO) who kept track of enrolled foreigners so they are properly recorded in the Student and Exchange Visitor Information System [ICE Must Investigate Columbia University’s Foreign Student Program in Light of Fraud Allegations, by Jon Feere, Center for Immigration Studies, May 31, 2022]. The Department of Homeland Security created SEVIS after 19 foreigners, one of them here on a student visa, killed 3,000 Americans on 9/11 [Identity and Immigration Status of 9/11 Terrorists, FAIR.us, January, 2011].

A former high-ranking official at Columbia University has filed a lawsuit against the school after having been fired for allegedly refusing to engage in fraud in the school's foreign student program at the request of the school.https://t.co/gQjluelBv4

Reported CIS’s Feere, “[S]chools must be certified by a division within U.S. Immigration and Customs Enforcement (ICE) called the Student and Exchange Visitor Program (SEVP). Schools that fail to abide by important national-security-focused regulations may have their certification withdrawn, meaning they will not be able to enroll new foreign students for at least one year.”

Columbia could lose its SEVP certification, which would be a significant blow to the school. But that aside, consider the import of what Feere has explained. Leftist college administrators, who have a vested interest in pulling in as many foreign students as possible, are in virtual control of our national security apparatus where those students are concerned. Thus, they have a vested interest in finagling records to keep as many students as possible in the country.

Brens’ lawsuit says Columbia ordered her and her staff to commit immigration fraud:

[The school expected Brens to] “process immigration documents on behalf of a group of potential students from South Africa without the necessary documentation, including evidence of funding and full-time engagement in a prescribed program, as required by federal regulations.” Brens claims that Columbia’s “Provost, Dean and Vice President for Academic Affairs, Dr. Stephanie J. Rowley, accused Brens of being too ‘inflexible’ in the application of federal regulations.” Brens claims that she and her staff “were frequently asked to ‘bend’ the rules in order to keep the enrollment of international students at a high level” and were directed to “certify that certain international students were enrolled full-time when they were, in fact, not full-time students” and “extend students’ immigration documents when they did not qualify based on federal requirements” and “ignore the lack of English language proficiency.”

Brens alleges that Columbia canned her for refusing to defraud DHS.

No one should believe that Columbia is the only school that’s trying to pull a fast one on DHS.

As for Columbia, consider, again, its strong incentive to monkey with SEVP requirements:

Other schools have the same incentive. Time to audit all of them.

Bottom line: No one knows a damn thing about these students, who they are, where they are, and what the heck they do all day.

Maybe that’s why one of them was involved in a plot to murder POTUS 43 Bush.