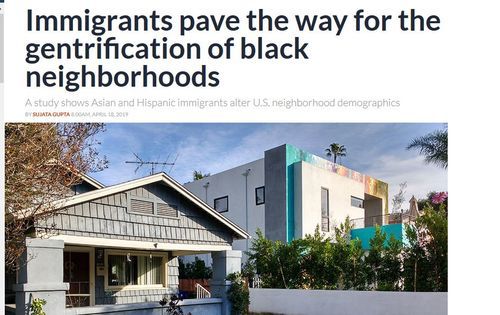 It’s pretty easy to do. Just read my old stuff for ideas, look up some data, and publish. From Science News:

Immigrants pave the way for the gentrification of black neighborhoods

… Many think of gentrification today as wealthy, white millennials moving into low-income, minority neighborhoods and driving up housing costs. Yet a new study suggests that another group may play a key role in the process: immigrants.

Gentrification, in which affluent outsiders settle and renovate rundown neighborhoods, generally decreases in white neighborhoods when immigrants from Asia and Latin America move in. The opposite is true in black neighborhoods, where rising immigrant numberss increase the odds an area will be gentrified.

Next, somebody might do a breakthrough paper on how rising numbers of gay men increase the odds an area will be gentrified.

All this might almost have something to do with crime …

“Changing the ethnoracial composition might make neighborhoods seem more amenable for [white] people to move in,” suggests study coauthor and sociologist Jackelyn Hwang of Stanford University, who presented her findings April 11 at the annual meeting of the Population Association of America in Austin, Texas. …

In 2015, Hwang showed that, even in the 1970s and ’80s, black neighborhoods were more likely to be gentrified following the arrival of Asian and Hispanic immigrants. With the number of U.S. immigrants growing from 9.7 million in 1970 to 42.4 million in 2014, Hwang suspected her earlier observations might still hold true.

In a new analysis involving 151 U.S. cities with populations over 100,000, Hwang used census data from 1990, 2000 and 2010, as well as estimates from the 2010–2014 American Community Surveys tracking demographic trends (referred to in the study collectively as 2012 data). Within those cities, Hwang isolated census tracts, which serve as proxies for neighborhoods of about 4,000 people, that had a median household income below the city’s 1990 median household income. These tracts could be gentrified, she theorized.

The research underlines that “gentrification is a much more complicated phenomenon than a white hipster moving into a black neighborhood,” says Mahesh Somashekhar, a sociologist at the University of Illinois at Chicago not involved with the study.

However, sociologist Derek Hyra suggests immigration trends may not be a main driver of gentrification. Instead, he wonders if all people, including blacks, whites and recent immigrants from Asia and Latin America, are simply following new jobs that happen to be located near historically black neighborhoods.

But everybody knows that there aren’t any jobs located near historically black neighborhoods such as Harlem, Brooklyn, the District of Columbia, downtown Los Angeles, etc. Everybody knows blacks got redlined out of the really booming places like Dubuque.

Article
Where Have You Gone, Donald Trump? A Nation Turns Its Yearning Eyes To You
MORE...
POPULAR TAGS