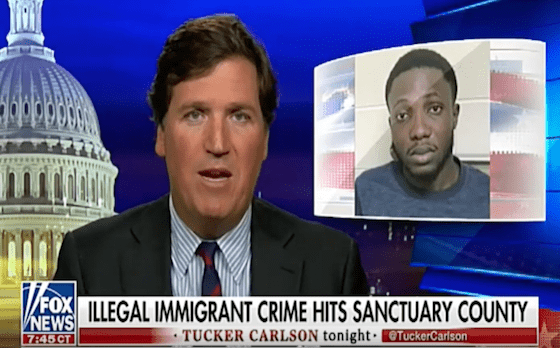 Montgomery County Maryland is a terrible place to live if you care about public safety. The top political leader there prefers to shelter violent illegal aliens instead of protecting the law-abiding citizens.

County Executive Marc Elrich has set the tone for an extreme sanctuary policy, wrongly stating that “County police and our Correction and Rehabilitation departments are not authorized to detain someone based on an ICE detainer.” As a result, dangerous foreigners have been released onto local streets rather than deported, and they have committed violent crimes, with rape being a favorite.

At that time, September 4, all the perps were Hispanic, as seen in the mugshots below: 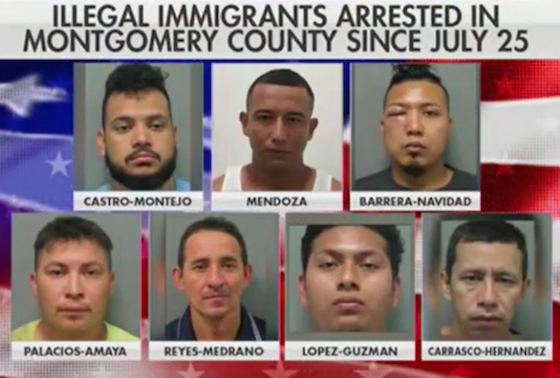 Now Montgomery County criminals have become more diverse with the addition of a Nigerian: 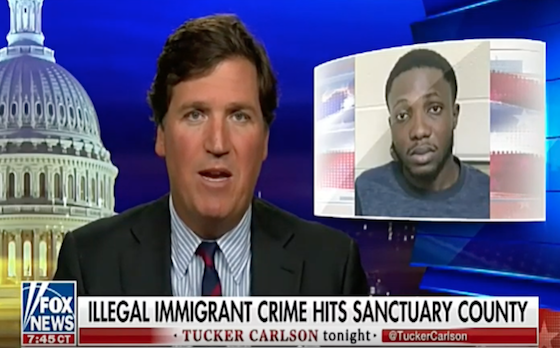 As it happens, concerned citizens plan a community rally on Friday, September 13 in Rockville, Maryland to protest the lawlessness. Michelle Malkin and Larry O’Connor are scheduled to appear.

TUCKER CARLSON: Illegal immigration in the Montgomery County, Maryland, continues unabated. In fact, authorities there are helping it, but the toll is rising dramatically. Oluwakayode Adebusuyi is an illegal immigrant from Nigeria. According to county authorities, Adebusuyi recently raped an intoxicated woman inside her car. That would make him the eighth illegal alien charged with a sex offense in Montgomery County in the last six weeks, since July 25th.

Amazingly, this man now charged with a sex crime has stayed in the United States, despite past very serious run-ins with the law — not minor stuff, major stuff. For example, in August 2018, this man was charged with second degree assault, false imprisonment and a fourth-degree sex offense.

But somehow prosecutors dropped those charges. He was not deported. He stayed in America despite being here illegally. And these new charges are the results of that. Ken Cuccinelli is acting Director of U.S. Customs and Immigration Services, and he joins us tonight. Mr. Cuccinelli, thanks very much for joining us.

KEN CUCCINELLI: Good to be with you, Tucker.

CARLSON: So we’ve been following horrified as the toll of sex offenses in Montgomery County, Maryland, has risen by illegal aliens. Clearly, the county officials there are doing nothing about it. They’re blaming neo-Nazis for complaining about it, et cetera. I mean, they’re completely unwilling to protect their own citizens. Can the federal government do anything to protect them?

CUCCINELLI: Well, of course, ICE even though Montgomery County won’t fully cooperate with ICE, ICE still does its job of removals when criminals come to their attention. You noted this most recent illegal who was charged with sexual assault rape, most recently had previously been identified to law enforcement, well, they didn’t let ICE know last summer when they had this person in their custody. And they undoubtedly knew he was illegal, and yet did not notify federal officials.

And so when they don’t know that a criminal is present, ICE doesn’t know to even try to pick them up. So and of course, sadly, enough, Montgomery County is not alone in this, their neighbor, PG County here bordering Washington, D.C. and we’ve all been reading it in the last few days about North Carolina and the victims down there are almost 500 of these folks released without giving ICE notice. And these are people that no American would want to keep in this country.

And oddly enough, it is many of these folks on the left who say, “Oh, we want to get rid of the criminal aliens,” but they’re the very same ones who enact these sanctuary policies that in fact harbor these exact illegals who are committing other crimes in the communities in this country.

CARLSON: What a tragedy this is.

CUCCINELLI: It is a tragedy.

CUCCINELLI: Well, they’re certainly not cooperating with federal law, and I can tell you, as a former attorney general, that it is a long, really nonpartisan history of law enforcement of cooperating across levels — federal, state and local law enforcement. This is a very recent phenomena, Tucker, where people see political advantage to playing games with law enforcement and public safety on the left, and it is having tragic, tragic consequences for these communities.

CARLSON: Yes. It’s certainly is. Director Cuccinelli, thanks so much for joining us tonight. I appreciate it.