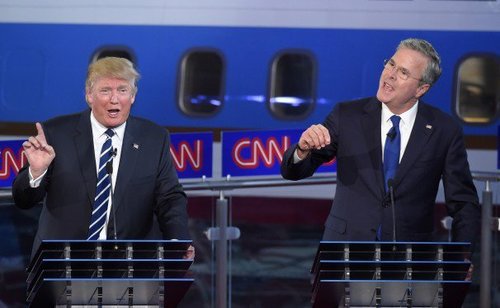 First off, Trump Remains Unstumped. CNN clearly wanted the other candidates to go after him, but they acted mostly afraid of him. Even Carly Fiorina didn't go after him at first. Trump's job in the debates is to hold the line, just as last time. And he did that. Even on the vaccine question, Paul and Carson essentially agreed with him.

Second, Jeb Bush is toast. Trump destroyed him when he refused to apologize to his wife and then later got him to give him a "Top Gun" style high five. Bush is floundering and can't decide whether he wants to be righteously indignant at Trump or his friend.

Carson gave a snooze-worthy performance. His poll numbers may remain stable, but it's hard to imagine them going up.

Carly Fiorina is clearly being pushed by the consultants and the Beltway Right as their new candidate. And sadly, she may be the worst of the bunch on immigration. For all her pre-memorized responses, it was quite clear she had no idea what she was talking about when it came to immigration, birthright citizenship, and the 14th Amendment.

However, to me the single worst part of the debate was when Fiorina criticized the Democrats for not "doing something" on the immigration. This was the kind of rhetoric we heard from Lindsey Graham when he tried to pin the failure of the Gang of Eight's bill on the Democrats. Fiorina may be worse than simply a wimp on immigration. She may actually be the most pro-illegal immigration of ALL the front runners, including ¡Jeb! and Rubio.

It's worth noting Fiorina is basing her entire approach on being an "outsider." It's pretty dishonest, considering the only reason she's an "outsider" is because she couldn't beat Barbara Boxer in a Senate race.

Look for plenty of faux enthusiasm from the Beltway Right about Fiorina and her collection of clichés . The way Trump remains ahead? Focus on the immigration issue and Fiorina's horrible record on the most important issue of our time.