90-year-old Jean Raspail Says: I Told You So

Here’s an excerpt from a new interview with 90-year-old novelist Jean Raspail. It appeared in French in Le Point and in English translation in Gallia Watch:

- Have you thought about a sequel to The Camp of the Saints?

- It is certain that there will be one, but not from me. Will it come out before the great collapse? I’m not sure.

- In your book you speak of the “ferocious” nature of the migrants. But we see today that those arriving from Syria or elsewhere don’t have a knife between their teeth…

- What’s happening today isn’t important, it’s anecdotal, for we are only at the beginning. Right now, the whole world is talking about this, there are thousands of specialists on the issue of migrants, it’s a chaos of commentary. Not one looks at the thirty-five years that lie ahead. The situation we are living through today is nothing compared to what awaits us in 2050. There will be nine billion people on the earth. Africa has gone from one hundred million to one billion inhabitants in a century, and perhaps twice that in 2050. 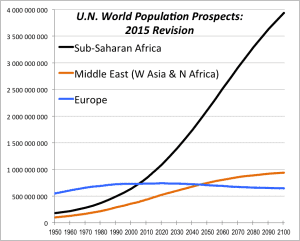 Will the world be livable? The overpopulation and the wars of religion will make the situation fragile. That’s when the invasion will occur, it is ineluctable. The migrants will come in great part from Africa, the Middle East and the borders of Asia…

- Should we fight the evil at the roots and bomb the strategic points of Daesh, as France has just done?

- It’s their problem not ours. It doesn’t concern us. What are we doing in this business? Why do we want to play a role? Let them cope! Years ago we got out of these regions? Why go back?

- And what do we do when Syria sends out orders to attack France?

- We block them. We prevent them from entering French territory. The politicians have no solution to this problem. It’s like the debt – we pass it on to our grandchildren. Our grandchildren will have to manage this problem of massive migration.

- The Catholic Church is not at all on this wave length. It is urging the faithful to show their generosity…

- I have written that Christian charity will suffer a bit when faced with the answers to the influx of migrants. It will have to steel itself and suppress compassion of all sorts. Otherwise, our countries will be submerged.

- Refuse everybody, including the Eastern Christians?

- Possibly. But they are closer to the Westerners through their religion. This is why many Frenchmen would like to accept them. France, this country with no religious belief, proves that the basis of Western civilization is a Christian basis. People, even if they don’t go to church anymore and or practice, react in accordance with this Christian basis.