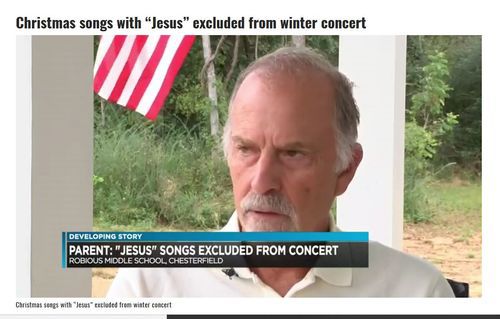 The War on Christmas is starting early this year: according to Karina Bolster at WWBT in Richmond, Virginia, the chorus teacher at Robious Middle School has decided to drop songs mentioning Jesus from upcoming concerts. [Christmas songs with “Jesus” excluded from winter concert, by Karina Bolster, NBC12, October 10, 2018] Note that the title says "Winter Concert"—must not ever say "Christmas Concert"—just as schools no longer have Christmas vacation—just Winter Break.

The article quoted an email from the teacher which said that this was "in order to be more sensitive to the increasing diverse population at the school." And that

“We had a few students who weren't comfortable singing a piece I have done many times in the past, but it is of a sacred nature and does mention Jesus."

The article doesn't mention who these diverse students who objected were. In my experience, northeast Asians like Chinese never make a fuss about Christmas--it is always white social justice warriors and Jews. Perhaps these diverse objectors could be members of the increasingly aggressive Indian and Muslim immigrant population?