Trump Considers Cutting Refugees by More Than Half

It may be that President Trump wants to look tough on immigration, given his big hints about supporting a DACA amnesty in a few months. So a New York Times front page story about decreased refugees may indicate a strategy to that end.

Refugees add up. Pew Research noted earlier this year that around three million refugees have been deposited in the US since Congress passed the Refugee Act of 1980. And refugees are diverse, like the 16,370 Congolese admitted in fiscal 2016 along with 39,000 Muslims the same year.

An annual chart beginning with 2002 shows an upward drift: 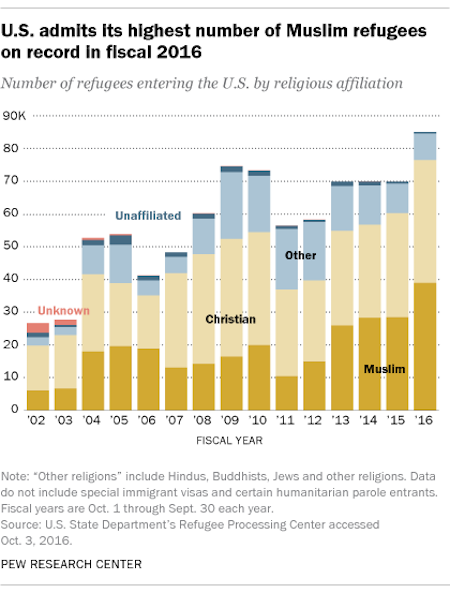 In addition, the refugee program is not popular among registered voters. A Pew poll taken last October found 54 percent of responders said that other nations should sort out their own problems, and the US therefore did not have a responsibility to admit refugees from Syria and similar regions.

The New York Times story was reprinted in the Gulf News (located in Dubai, United Arab Emirates) without any annoying limits. So click away:

US may cut refugee limit by more than half, GulfNews.com (NYTimes story), September 13, 2017

WASHINGTON: The Trump administration is considering reducing the number of refugees admitted to the country over the next year to below 50,000, according to current and former government officials familiar with the discussions, the lowest number since at least 1980.

President Donald Trump promised during his 2016 campaign to deny admittance to refugees who posed a terrorist threat. In his first days in office he took steps to radically reduce the program that resettles refugees in US cities and towns, capping the number admitted at 50,000 as part of his executive order banning travel from seven predominantly Muslim countries. That was fewer than half the 110,000 refugees President Barack Obama said should be admitted in 2016.

But in recent weeks, as the deadline approached for Trump to issue the annual determination for refugee admissions required by the Refugee Act of 1980, some inside the White House — led by Stephen Miller, Trump’s senior adviser for policy — have pressed to set the ceiling even lower.

No final decision has been made, according to the officials, but as the issue is being debated, the Supreme Court on Tuesday allowed the administration to bar almost any refugees from entering the country while it considers challenges to the travel ban order. The court will hear arguments in the case next month.

Spokesmen at the White House and the departments of Homeland Security and State declined to discuss an annual figure, noting that it had not yet been finalised. By law, the president must consult with Congress and make a decision by the start of each fiscal year, October 1, on the refugee ceiling.