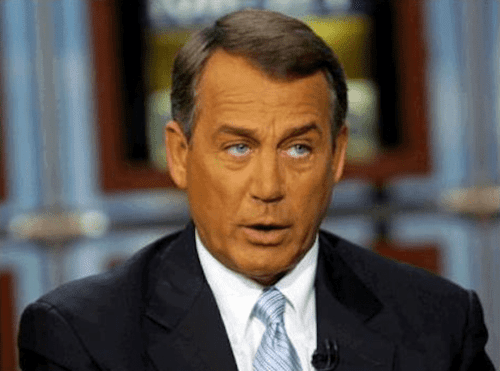 Boehner: “It needs to be fixed. We’re a nation of immigrants, the sooner we do it, the better off the country would be." He's not talking about deportations...

Tangerine colored drunkard John Boehner stumbled out of whatever speakeasy he's been crashing in to declare his subservience to his masters and forthright determination to dispossess Americans in the name of cheap labor.

Immigration reform will help our economy, but you’ve got to secure the border first,” the Ohio Republican said after a speech at the conservative think tank American Enterprise Institute. “We’ve got a mess and everyone knows we’ve got a mess.

“Our legal system is broken, our border isn’t secure, and we’ve got the problem of those who are here without documents,” the Speaker continued. “It needs to be fixed. We’re a nation of immigrants, the sooner we do it, the better off the country would be."

It's incredible that even as the Democrats have abandoned the pretense that mass immigration is about anything other than importing their favored racial groups, Republicans stubbornly persist, all evidence to the contrary, in saying that importing tens of millions of unskilled Third Worlders is how you compete in a 21st century global economy.

Remember Boehner's statement when the media tries to make out that the GOP didn't perform up to expectations because of their "opposition to immigration."