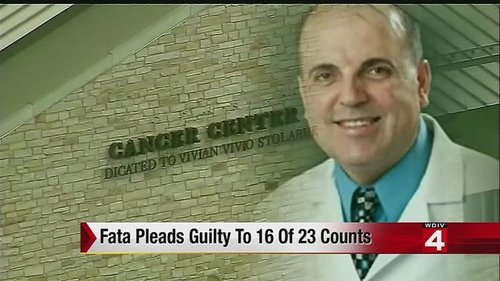 Horrific: A Detroit doctor pled guilty to misdiagnosing healthy people with cancer and pumping them full of chemo http://t.co/kEtmTbKDlw

It really is a horrible case—a Lebanese immigrant doctor gave chemotherapy to people who didn't have cancer, in order to bill Medicare.

Dr. Farid Fata misdiagnosed hundreds of patients with cancer and pumped them with unnecessary chemotherapy

Ms. Rothkopf's story is based on a Detroit Free Press article:

Fata of Oakland Township was charged with running a $35-million Medicare fraud scheme that involved billing the government for medically unnecessary oncology and hematology treatments. The government says Fata ran the scheme from 2009 to the present, through his medical businesses, including Michigan Hematology Oncology Centers, with offices in Clarkston, Bloomfield Hills, Lapeer, Sterling Heights, Troy and Oak Park.

According to the government, Fata had a patient load of 1,200 people and received $62 million from Medicare; he billed for more than $150 million.

Fata, a native of Lebanon, has lived in Michigan for a decade and became a naturalized citizen in 2009. He is being held on $9 million bond.[Emphasis added.]

Of course the Salon.com's Twitter feed calls him a Detroit doctor, and the website headline just calls him a doctor.

Of course, he's really a Beirut doctor, a graduate of St. Joseph's University in Lebanon, who through some freak of immigration policy is allowed to come to America and take advantage of American patients and huge amounts of American healthcare money.

This is not the first case of America getting a bad bargain on foreign doctors—see  Why Does America Tolerate Indian Immigrant Medical Fraud? by Thomas Meehan , July 26, 2014.

Dr. Victor Souaid of Coral Springs, Florida was recently convicted of defrauding cancer patients by pretending to inject them with Lupron, which costs $695 a shot. He injected them with (probably) water instead.

Souaid not only billed insurance companies for injections he wasn't giving, he was wholesaling the drugs themselves to other doctors.

That is exactly the opposite of what Farid Fata was doing—he was putting real drugs in people without cancer, Souaid was injecting people with real cancer with phony drugs. But they were both Lebanese immigrants...