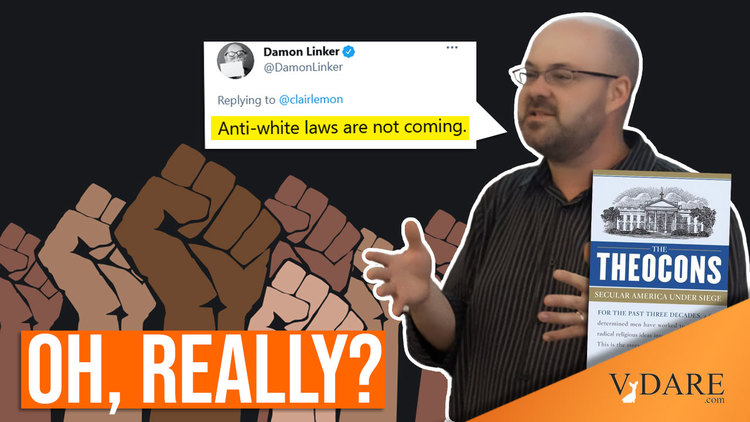 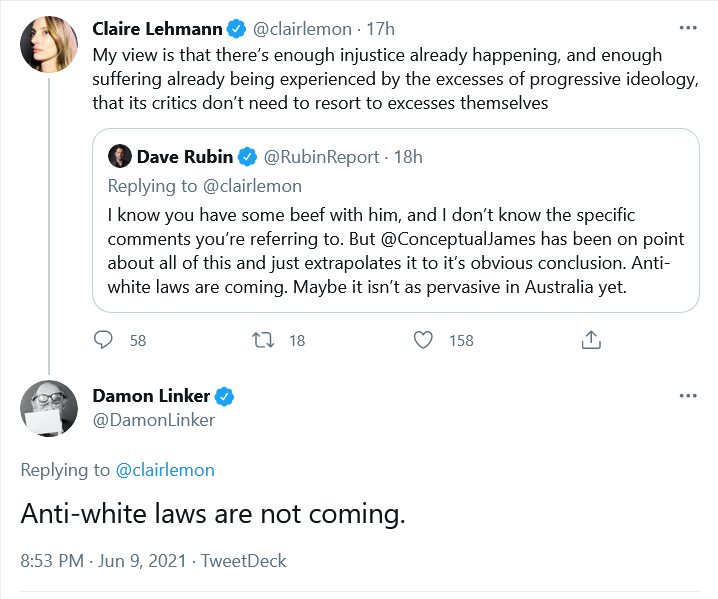 "Anti-white laws are not coming."? Does Linker [Tweet him] think that the Biden/Harris Administration, which ran for office on a platform of anti-whiteness, will be satisfied with the many anti-white laws that already exist, and will limit themselves to anti-white executive orders, anti-white Deep State prosecutions, and continuing to allow anti-white mobs to run rampant without Federal prosecution?

No, what he means is that according to him, and in defiance of fifty years of political and legal experience,  anti-whiteness isn't even a thing.

Damon Linker, in case you've forgotten, is the guy who worked for the late Richard John Neuhaus for years as an editor of First Things magazine, and then backstabbed him by writing a book saying that Neuhaus and people like were part of conspiracy to force Christianity on America.

Neuhaus described the experience in August of 2006:

Damon Linker’s book is scheduled for release in September and I have seen an advance copy. An expanded version of Mr. Linker’s long article in the New Republic of April 3, 2006, it is called The Theocons: Secular America Under Siege. The message of the book is printed on the front of the dust jacket: “For the past three decades, a few determined men have worked to inject their radical religious ideas into the nation’s politics. This is the story of how they succeeded.” The “determined men” are those of us associated with First Things. Mr. Linker provides a relentlessly tendentious commentary on items appearing in these pages. A point-by-point correction of the book’s many misrepresentations would be exceedingly tedious. A word is in order, however, on the origins of the book. Mr. Linker worked for First Things from May 2001 through January 2005, first as associate editor and in his last year as editor. He was a speech writer for Rudolph Giuliani when he applied for the position as associate editor. At First Things he was a cooperative colleague and gave no indication that he was not completely supportive of the mission of the magazine. During his years with us, the only policy concern he ever expressed to me was that he thought the magazine should be more critical of U.S. actions in the Middle East. That is a question on which colleagues can and did disagree without personal rancor. In the fall of 2004, he indicated to me that he was weary of the long commute to Connecticut and would like at some point to get a large enough advance for a book so that he could become a full-time writer. I was entirely sympathetic. A few weeks later, he told me he was thinking of writing a book about First Things and its editor in chief. He explained that the book would be a critical appreciation of the achievements of the magazine. I said I would be happy to cooperate with such a project but I didn’t think there would be enough interest in the subject to elicit a large advance from a publisher. Moreover, this would be a first book by a relatively unknown writer. In early December, he told me that several publishers had indicated intense interest in the book he was proposing and that Doubleday had offered an advance of $160,000. He wanted to leave at the beginning of 2005 to start writing. Surprised but pleased by his good fortune, I congratulated him and renewed my offer to be of assistance with the book. I then said it might be helpful in that connection if I could see the proposal he had submitted to publishers. At this he blanched and, with obvious embarrassment, said that would not be possible. This was the first indication that he had agreed to write what in the publishing business is known as an “attack book,” which, unfortunately, is the genre to which The Theocons belongs.

You see the (financial) point, don't you? No mainstream publisher would, as Neuhaus knew, pay a lot of money for a book in favor of Christian conservatism, but there's huge funding available from, in this case Doubleday,  for a Christophobic book bashing them, by an "insider." (Did you know that if you divided $160k into thirty piece of silver, each piece would weigh, at today's prices, 13 pounds?)

In spite of Linker's Christophobic rhetoric, everyone knows that pro-Christian laws are not coming.