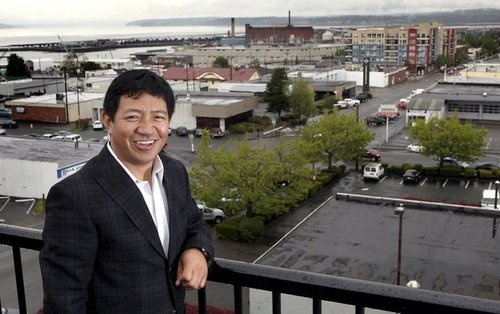 Trade Group Says The Lobsang Dargey Fraud Case Could "Damage Immigrants’ Chances Of Getting Visas"—It Should!

Treasonous "Invest in the USA" ("A D.C. based group" representing 270 firms) takes the side of an Asian crook (allegedly, for legal reasons) in a Federal fraud lawsuit fearing the case could reduce the number of Chinese paying for EB-5 visas to immigrate.

The federal fraud lawsuit against Everett-based Path America developer Lobsang Dargey could damage immigrants’ chances of getting visas and diminish the flow of billions of dollars of foreign direct investment to the U.S., says a national trade group that seeks to be heard in the case.

Invest in the USA (IIUSA), a D.C.-based group, asked the court’s permission Thursday to file an amicus brief in the case. It said it’s concerned about the fate of immigrants who each invested $500,000 in Path America’s projects in Everett and Seattle in hopes of becoming permanent U.S. residents by obtaining an EB-5 visa.

A real estate agent told me and my wife that "90% of the expensive homes in the Seattle area are being purchased by Chinese.” A Chinese immigrant told me about plans to open a restaurant—admitting it didn't matter if it made or lost money—it was just a way to launder Chinese money.

Elsewhere I have read that Chinese crooks are eager to get their money out of China and into the US before they are caught and they lose their money.

Many are making money because of the huge immigration of Chinese and Indians to the Seattle area but few seem to care about the US workers displaced by the immigrants. Immigrants increase the number of leftist voters (the kind who elected Indian Marxist Kshama Sawant to be a Seattle Councilwoman) and the amount of corruption. Shouldn't the future of our country be more important than money?