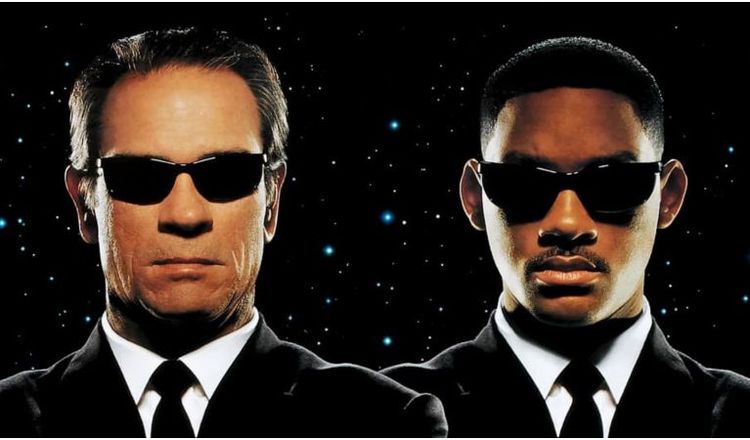 D. A. King's post, below is about Tommy Lee Jones's latest movie, but years earlier, Jones also abused the real INS as a member of the imaginary MIB, in the opening scene of Men In Black

, where an outer space type alien is smuggling himself into the US in a van filled with regular illegal aliens, driven by an American alien smuggler.

Lee and his partner come along, separate the outer space creature from the illegal immigrant, and release all the illegals into the United States.

TOMMY LEE JONES No hablas ni una palabra del Espanol, verdad, amigo? (You don't speak a word of Spanish, right, friend?)[VDARE.com note: Jones uses this test to find a space alien, correct in this case, but he could just as easily be a Mixtec Indian, or an Arab.]

Again, the Guy smiles and nods. TOMMY LEE JONES looks back at Dee.

TOMMY LEE JONES (CONT'D) We got a winner. (to the others) Los restos estan libres a irse. Largense! (The rest of you are free to go. Scram!)

KAY Tomen el camion, y vayeuse. (Get on the road and go.)

TOMMY LEE JONES Don't "Sir" me! You have no idea who you're dealing with!

Silence on the road. The Driver grins, jumps back in the front seat of the van. The others pile into the rear and they tear out of there.

TOMMY LEE JONES (CONT'D) (to Janus) We're gonna have a little chat with our friend here. You boys can hit the road... and keep on protecting us from dangerous aliens.[Complete script]

"Dangerous aliens" spoken in a dismissive, sneering tone, like the illegal aliens who cross the border daily aren't dangerous. But they are, of course. In spite of this, Men In Black is a fun movie, with lots of moments that will ring true with immigration restrictionists, like this fabulously stereotypical moment:

TOMMY LEE JONES : Today there are approximately 1500 aliens living and working in Manhattan and most of them are decent enough, they're just trying to make a living. WILL SMITH: Cab drivers? TOMMY LEE JONES : Not as many as you'd think.