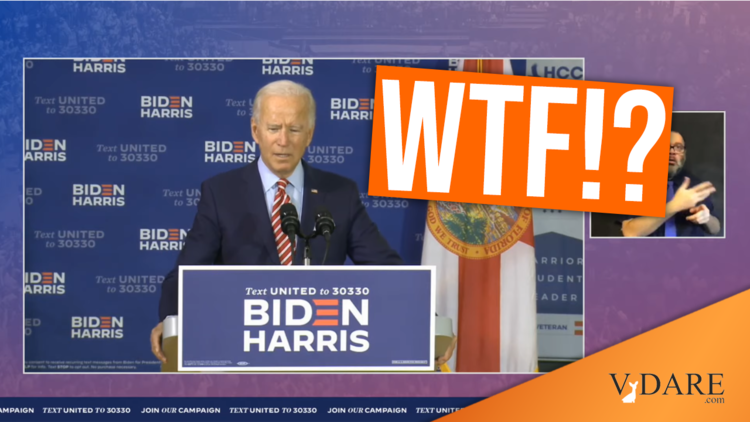 Earlier: For Biden, Story Of Black Man Who Ran Over, Raped, And Murdered Elderly White Woman Is About "Traumatic Brain Injury" And American Veterans

The Democrats and media are almost unanimously agreed that they will package Joe Biden this fall as a boring, calm, reassuring candidate. The only dissenter is Biden, who sees himself as a man full of surprises who might say anything, whether it’s Thomas Edison not inventing the lightbulb or the following disturbing anecdote:

What the hell was that, Joe? The opening scene of some low budget slasher movie screenplay you’ve always wanted to pitch to Hollywood?

As I’ve been pointing out, with his vanity and lack of filter, the second-most Trump-like man in American politics is Biden. One difference, though, is that with Trump it’s usually pretty obvious at all times which angle he’s working when he brings something up.

But with Biden, a lot that spills out of his mouth seems less than calculated, just something that he suddenly felt the need to get off his chest. I presume that Monday’s excessively detailed story about the necrophiliac madman was in service to some focus-grouped campaign theme like more money for veterans’ mental health services, but, Joe, please, Too Much Information.