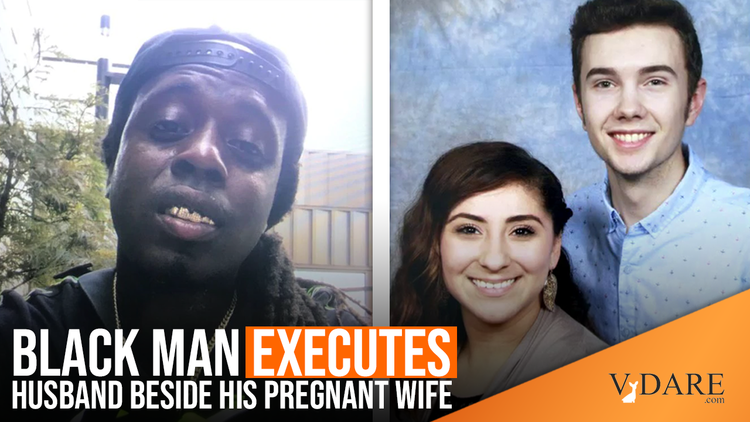 His Name Is Jordan Stevens: White Male Executed in Front of His Four-Month Pregnant Wife by Black Male on Killing Spree

No celebrities lamenting his murder and how he died.

Just another victim in a nameless war.

His name is Jordan Stevens.

He was a white man executed by a black male… all in front of his four-month pregnant wife.

A Tennessee man was executed in front of his pregnant wife after they were taken hostage in a wild killing spree, authorities said.

Jordan Stevens, 23, and his four-month-pregnant wife, Aileen, were driving Sunday to church in their Ford Mustang when they were kidnapped by 29-year-old Dangelo Dorsey on the side of I-24 near Beechgrove, news station WTVC reported.

Dorsey initially rear-ended their vehicle, prompting them to pull over under the impression it was a fender-bender, authorities said.

He then kidnapped them at gunpoint and forced them to drive him to their home in Morrison, where he stole two of their guns, swapped vehicles and took off again with the couple, officials said.

At some point, Dorsey fatally shot Stevens and forced his body out of the vehicle along I-24 near Manchester, authorities said.

He then drove off with Stevens’ pregnant wife still in the car, taking her on a high-speed police chase, officials said.

Police said the car accelerated to over 100 mph before crashing and flipping on the interstate.

“At that point, Dorsey took his own life,” Tennessee Bureau of Investigation Director David Rausch said in a statement.

“The female hostage was safely recovered,” he added.

Authorities revealed that Dorsey had been on a violent rampage that began around 9:30 a.m. on I-24.

He exited and attempted to carjack a nearby vehicle, though the driver was able to escape on foot, officials said.

Dorsey next approached a nearby truck and shot the man behind the wheel in the face, authorities said.

Another driver was then confronted by the assailant and shot in the hand as she tried to drive away, authorities said.

Rausch said the agency doesn’t know why Dorsey went on the killing spree, adding that there is “a lot of work ahead of us to connect all the dots.”

His name is Jordan Stevens.