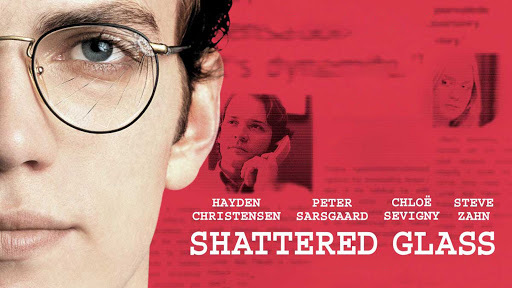 Through a Glass Darkly: Sabrina Rubin Erdely and Stephen Glass

An extremely strange aspect of the Rolling Stone RaperGate hoax that I’ve been harping on for awhile is the metaphorical role of hoaxer Stephen Glass, the subject of the 2003 movie about a magazine, Shattered Glass.

Both magazine writer Sabrina Rubin Erdely and her first major skeptic, magazine editor Richard Bradley, had been colleagues of Glass earlier in their careers. And, as I then pointed out, the most self-evidently implausible aspects of Erdely’s story are related to all the shattered glass all over the place — there are four separate incidents in Erdely’s article of glass shattering.

Is all this purely coincidence?

Bradley pointed out in his first post that he’d learned from Glass to be wary of what he desired to be true. But what did Erdely learn?

At Bradley’s Shots in the Dark blog, commenter Rip this Joint speculates:

Sabrina Rubin Erdely worked with Steven Glass while both were students at Penn. In her review of the movie Shattered Glass, which tells the story of his fabrications, she muses on his actions:

I found the movie riveting—although, due to the personal connection, plus the fact that Shattered Glass portrays my own line of work (realistically, I might add), I’m an admittedly biased viewer. As the lights came up, however, I felt dissatisfied by the film, because it never attempts to resolve the big question: Why did he do it?

All things considered, Glass’s fabrications and cover-ups probably took more time and effort (and produced more anxiety) than if he’d just done the reporting in the first place.

These aren’t the actions of a person under strain, as I once tried to convince myself, or of a man-child being suffocated by his overbearing parents. They’re the actions of a sociopathic creep. The movie points in that direction, but doesn’t try to nail it down. What was Glass after? What was he running from?

The movie ultimately doesn’t shed much light, and Stephen Glass himself isn’t telling. If, that is, he even knows.

What seems to be confusing her is that Glass went through all this stress and trouble for nothing. His lies didn’t support any agenda or narrative. He was wasting his time merely creating really interesting stories. And this confuses Rubin Erdely. Why? She doesn’t seem to upset with the concept of lying in general, her only issue seems to be lying without an agenda. But in support of a noble cause like taking down a squad of Rape Gestapo frat-boys, she finds deception a bit more acceptable?

Cops like to keep suspects talking, without too much care about what they’re saying, because suspects frequently (and unknowingly) “leak” the truth, even when they lie. Erdely appears to have “leaked” her personal ethical standard while critiquing Glass.

Like it says on the Shattered Glass DVD box: “Read between the lies.”

At first, I thought it said “Read between the lines” but now I see that you are supposed to be misled if you aren’t reading very closely.