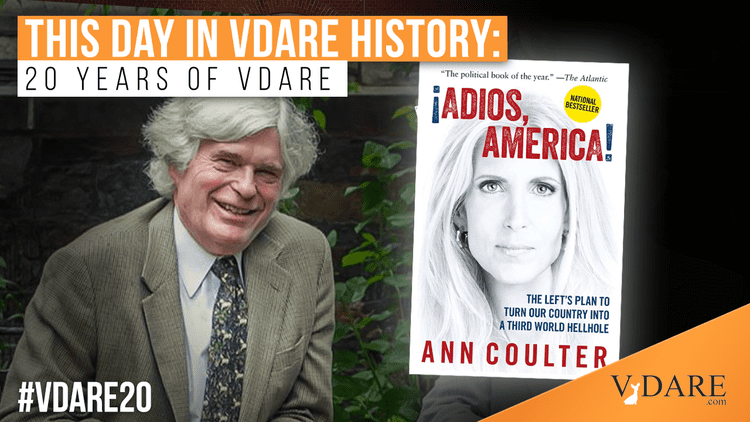 This Day In VDARE.com History, 2015: Ann Coulter Talks To CHRONICLES About ADIOS, AMERICA!—Credits Peter Brimelow With Changing Her Mind

Chronicles' Tom Piatak has an interview with Ann Coulter  on the Chronicles website.

Tom Piatak : How did you first become interested in immigration?

Ann Coulter: Peter Brimelow’s front page article in National Review. [But] then I never wrote about it. I was practicing law then, and you know you live in a bubble in college and law school. I suppose I believed all the Jack Kemp nonsense. I read that cover story in National Review and realized I’d been had. I’ve been lied to. Oh my gosh! It was the only time I remember completely changing my mind about something. Of course there wasn’t that much to change because immigration wasn’t something I had ever thought about. I was like a lot of Americans to this day, you just go along: We’re a nation of immigrants, immigration is a wonderful thing, aren’t they hard workers, blah, blah, blah. And since I become a writer, Peter has been haranguing me, demanding to know why I haven’t written about immigration. I kept telling him, because you said it all. I’ve nothing new to say. So I am pleased that with this book—you have to get to chapter 7 and you start hitting things that, I think, surprised even Peter. He wanted me to start the book at chapter 7: Just skip everything before, everybody knows that first stuff, Ann. But I had to stay: If only everybody did know that stuff.

Tom Piatak : And what do you hope to achieve with this book?

Ann Coulter: Oh man, I want to throw a wrench in the works. All I want is for Americans to read this. That’s all I want, that’s all I want. I had a Mexican immigrant sound engineer on the audio book, obviously he is a taxpayer with a job.

He likes the book but at one point, midway through, it was very sweet, he is unfamiliar with my general career and he said, “Um, I hope you won’t take the this the wrong way, but this is really pushing buttons, this book, and if you do any book signings, you should have a bodyguard.” And I laughed and said, “Well I already do. Nice to meet you, I am Ann Coulter.”

But other people have told me that too, people who have read this—certain important bloggers who shall go unnamed—and I said, I don’t care, I’d lose my life for this, if it got people to read this book. Just read the book. It’s my last words, just read the book.

For more on why Ann Coulter has to have a bodyguard at public appearances, see my 2011  article Little Green Footballs, The SPLC, Persecution Politics…And Real Persecution.

And as for Chapter 7 of Ann's book ("Immigrants and Crime: Why Do You Ask?") it contained things that surprised me, and I do this all the time. Read the whole interview and buy the book.