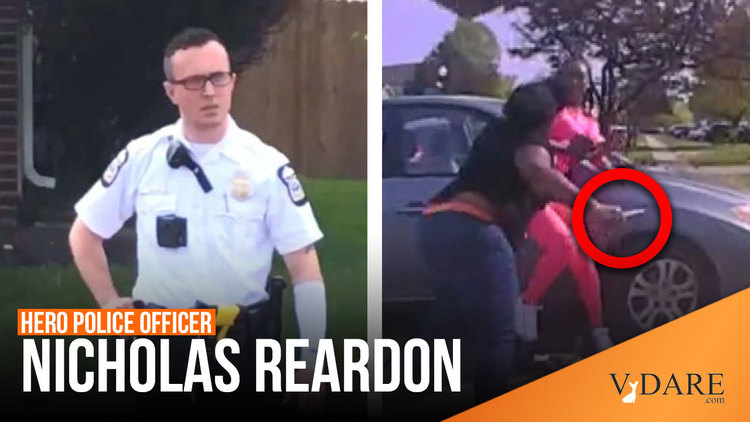 The WASHINGTON POST Doubles Down On The Columbus Knife Girl

Sometimes, the big media monopolies employ prudent discretion when the latest Hate YT cause célèbre sweeps social media. For example, I know it seems like ten years ago by now, but can you remember back a week or when the most hated white man in America was drill Sgt. Jonathan Pentland, who was videoed telling Deandre Williams to leave his neighborhood? It then turned out that Williams was a dangerous lunatic whose parents immediately had confined to a psychiatric facility. Well, showing an impressive nose for a story that everybody else was playing big but just didn’t smell right, the New York Times ignored the case entirely. It hasn’t mentioned anybody named “Pentland” since 2016.

Ma’Khia Bryant’s family remember her as loving, affectionate: ‘She didn’t even have a chance to live her life’

Bryant’s family and others are mourning the loss of the 16-year-old, killed by police this week

COLUMBUS, Ohio — Ma’Khia Bryant beams at her mother in a TikTok clip, then throws her arms around her neck. As Beyoncé’s “Dance for You” plays in the background, the teen lip-syncs the lyrics: “I’ma take this time to show you how much you mean to me, ‘cause you are all I need.”

It’s an intimate moment between mother and daughter, who were working hard to reunite after Bryant was placed in foster care, family members said.

“They had a close bond,” said Don Bryant, a cousin of Ma’Khia’s mother. “Ma’Khia was just an all-around good person.”

On Tuesday, 16-year-old Bryant was fatally shot by a Columbus police officer responding to a call for help at her foster home in the city’s southeast. Body camera footage released by police shows Bryant swinging what appears to be a knife at two people during an altercation outside the property before an officer arrives and fires four shots at her torso.

Knifeplay, just children’s knifeplay. She hadn’t even matured to gunplay yet.

On Thursday, family members struggled to make sense of the killing, at least the third fatal shooting by Columbus police this year.

Don Bryant said he had a hard time recognizing the teen seen in the police video lunging at others. He doesn’t “condone any violence,” he said, but called the officer’s decision to open fire disproportionate.

“There are other disengagement techniques that police could have used here,” said Bryant, who has served on the Mansfield, Ohio, city council. “I’m a supporter of police, as former city councilor. I understood their moves, their tactics, what they do. I just don’t understand what happened here.”

Ma’Khia was loving and affectionate with family, Don Bryant said. When he ran in a recent election for mayor of Mansfield, she texted periodically to see how his campaign was going.

Bryant was also a budding cosmetologist, fond of trying out different hairstyles and posting them to TikTok. Her account appeared to have been taken down Thursday, but a search of her name on the platform shows others honoring the 16-year-old by stitching videos from her account with messages calling for justice.

Two videos show her smiling and vibrant, dancing as she styles her hair. In one, she shows off her pulled-back locks topped off with a beaded headband. In another, she mouths along to Beyoncé as she pulls her curls into pigtails. She places her hand under her chin, showing off her completed look with a smile.

“She laughed a lot,” said Ila Bryant, Ma’Khia’s great-grandmother, adding that the teen did well in school. “Intellectually, she was very intelligent,” she said.

“But she didn’t even have a chance to live her life or make decisions,” Ila Bryant said. “Justice was not done.”

Officials identified the officer who fired shots as Nicholas Reardon, and said has been taken off street duty while the investigation proceeds.

The cop union’s lawyer always tells the cop to keep his mouth shut, so you never get these kind of human interest stories humanizing the policeman with heartfelt quotes from him.

… The shooting immediately ignited debate about whether deadly force was warranted. Speaking about general policy rather than the specific incident, interim police chief Michael Woods said at a news conference that police can use deadly force “when faced with someone employing deadly force.”

He also said officers are trained to shoot “the largest part of the body available to them.”

Criminologists and experts in use of force told The Washington Post that Reardon appeared to have followed police protocol.

“From a training standpoint, it’s textbook,” said James Scanlon, who spent 33 years with the Columbus Division of Police.

He said there was not enough “time nor distance nor barrier … where the officer would have time maybe to use a taser or to use a baton or to use mace.”

Bowling Green State University criminologist Philip M. Stinson said there may have been “split seconds away from the other girl in pink being seriously bodily injured or killed.”

“He had to act according to his training and in my view, preliminarily, he did so appropriately and effectively and tragically,” Stinson said.

But many in Columbus say the officer should have done more to de-escalate, and questioned whether the department needs to overhaul its training.

Nana Watson, president of the Columbus chapter of the NAACP, acknowledged that the officer who shot Bryant faced a split-second decision, but said, “I do not believe she had to die.”

“Did he have to get out of that car ready to shoot?” she said.

No, but the Girl in Pink is happy he was.

“Something else could have been done differently.” Columbus needs to upgrade de-escalation training and policies for officers, she said.

“It’s a tragedy we lost a 16-year-old child,” said Brown, a Democrat and daughter of Sen. Sherrod Brown (D-Ohio). “We may not have every answer for what happened on Tuesday, but the vision we all should have is one where every person involved in that altercation is still alive.”

Brianna Baker, founder and executive director of Justice for Black Girls, said she hoped that as people remember Bryant, “we capture the fullness of her Black girlhood.” Too often, she said, “Black girls are stripped of their innocence and childhood.”

“Everything about Ma’Khia’s death and the reaction to her death shows we don’t believe Black girls and children have the ability to make mistakes,” Baker said.

“They are still worthy of protection,” she added.

In Columbus, Ohio, where 16-year-old Ma’Kiah Bryant died in a police shooting this week, distrust of the police department runs deep. Protesters chant a long list of local Black people killed by officers. For many, “police protection” is something of an oxymoron; police themselves are a danger. That’s led to a major reform push that activists want to accelerate.

Hours after Bryant was killed, protests erupted in the area, with neighbors like Ira Graham III saying her death was further proof of something they’ve believed for years. It is not safe to call the police.

“I have an 18-year-old who happens to be at college now and I tell him, unfortunately, never called the cops for anything, because you call the cops and things can unfortunately end up like this,” said Graham at the neighborhood demonstration.

That sentiment isn’t unique to Columbus, but it is pervasive here, even for people like Dejuan Sharp, a 37-year-old U.S. Army veteran.

“I shouldn’t be scared of the police,” says Sharp. “I shouldn’t have to live in fear when these people pull up. I should be able to call 911 if my family needs it.”

Black people in Columbus have good reason to fear, according to activist Jasmine Ayres.

“We have one of the most violent police departments in the United States,” says Ayres.

That’s especially true for African Americans. According to the group Mapping Police Violence, Columbus police are responsible for more Black deaths in the last several years then departments in much larger cities like LA or Philadelphia, and many more than in comparable nearby cities like Cleveland and Cincinnati.

And the problems go way back. In 1998 the U.S. Justice Department investigated the Columbus police and found a raft of abuses, a pattern of excessive force, false arrests and false charges.

Columbus City Council President Shannon Hardin says unrest last summer after the murder of George Floyd in Minneapolis led to a fresh and powerful push to rein in the department.

“There really has been a lot of change and a lot of reform. We’ve done more in the last year in terms of police policy than we’ve done in 30 years, combined,” says Hardin.

Hardin says the city banned no-knock warrants, where police enter unannounced. It set up a registry to screen for officers involved in hate groups. Hardin’s especially proud of a new police unit, teams that include people with psychological training to respond to and de-escalate delicate situations.

If only the psychological de-escalators had been there during the dozen seconds Officer Nick “of Time” Reardon had to save the Girl in Pink’s life.

In new video, Makhia Bryant can be heard screaming “I’m gonna stab the fuck out of you, bitch,” while lunging at two unarmed people who were posing no imminent physical threat to her

I’m sure the social workers would have dealt with Ma’Khia’s two attempted stabbings and the man kicking the girl on the ground in the head in a sensitive fashion.

Hardin also points to a ballot initiative to create a civilian review board that would provide oversight and accountability, with subpoena power.

Columbus voters approved it with almost 75% of the vote. The city takes a major step toward establishing that board Monday when it is scheduled to finalize the first slate of board members.

But Ayres says a bolder move is in order.

“We want the Department of Justice to investigate the Columbus police department,” says Ayres. “It’s clear that after a decade of disproportionately killing Black and brown people, that they’re not going to fix it.” …