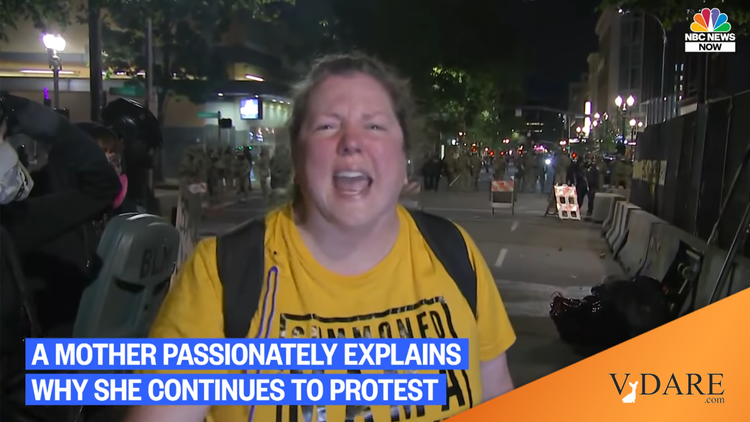 The Voice of America: Inside The Psyche Of A White Female BLM Rioter

“[Shouting] I’m so tired of it. I am so tired. I’m sleep deprived because I am a single mom and I work full time and I have to come and spend my nights with you, because I can’t stand in my own streets and say black lives matter. Black lives matter is why we’re here. We’re not here because of some [beep] building. We don’t care about the building. We don’t care about your stupid fence.

We care about [pause – dramatic shift to ‘weight of world on shoulders’ tone] black … lives … matter. And I’m a mom, and I heard George when he called out for his Mama. And that’s why I’m here. That’s why I’m here. Because George called out for his Mama. You all have moms. Your mom loves you. George’s mom loved him. And my kids love me and I want to go home to them. But they agree that this is important.

[Pause – appears to dimly recognize emphasis has so far been mostly on herself. Resumes shouting] And it’s not about some white ladies … [pauses, looks around, sees camera and begins to speak directly into it] It’s not about me. It’s about black lives matter. There are so many amazing black women who’ve been doing this fight for years. And I showed up late; I’m so tardy to this party. But I’m making up for it because I’m so angry. So angry.

[Pause. Resumes shouting at fence.] And black, black people are allowed to be angry. And who cares if somebody graffiti’s on this stupid building. We’re talking about human lives. [Video ends].