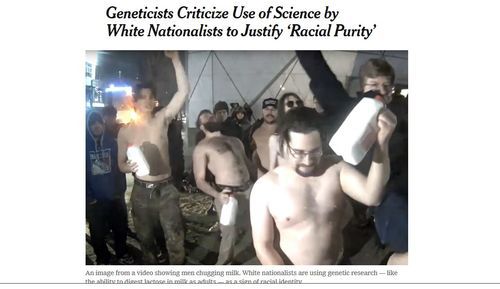 From the NYT, yet another try by reporter Amy Harmon to straighten out this whole DNA-race problem:

An image from a video showing men chugging milk. White nationalists are using genetic research — like the ability to digest lactose in milk as adults — as a sign of racial identity.

In an unusual statement on the role of science in the resurgence of white supremacy in America, the American Society of Human Genetics on Friday denounced “attempts to link genetics and racial supremacy.”

The statement, which appears in the November issue of the group’s scientific journal, The American Journal of Human Genetics, said the concept of “racial purity” was scientifically meaningless. The group has about 8,000 members and is the largest professional organization of scientists who study human genetics.

As newly visible and often-virulent groups of white nationalists have invoked genetic research to claim racial superiority, some geneticists have suggested that the field was not doing enough to counter the claims.

Some white nationalists have used research on the ability to digest lactose in milk as adults as a sign of racial identity. And some white nationalist messaging falsely suggests that the existence of genetic markers in people whose ancestors came from different continents mean there are genetic distinctions in behavioral traits like intelligence.

Though science is not much in evidence when white nationalists take to the streets chanting slogans like “You will not replace us,” scholars of racist ideology say contemporary white racism draws on the trope of “natural” racial hierarchy used to justify the enslavement of African-Americans, the American eugenics movement in the early 20th century and Nazi “racial hygiene” laws.

The topic has been much discussed on the side at the group’s annual meeting this week.

“As human geneticists, we cannot ‘just focus on our research,’” one geneticist, Melissa Wilson Sayres of Arizona State University, said Thursday night on social media. “We cannot pretend that our research isn’t being misused. Doing so is being actively complicit with white supremacy/nationalism.”

The statement by the genetics association came after an article in The New York Times examined how scientists who study human genetic diversity were struggling to respond to the racist misuse of science, even as their tools to discover how human populations vary genetically become more powerful.

In a widely read Op-Ed in The New York Times earlier this year, the Harvard geneticist David Reich wrote that “arguing that no substantial differences among human populations are possible will only invite the racist misuse of genetics that we wish to avoid.”

Uh, Reich didn’t say that there are “no substantial differences” — he said claiming that makes you sound dumb.

The genetics group’s statement is a step toward trying to equip the public with the tools to understand the evolutionary processes that give rise to patterns of human genetic diversity, geneticists said. It explains that genetic variation between human populations is linked to patterns of migration and the mixing of populations throughout history. Given how much mixing has occurred, it says, the white supremacist notion of racial purity is “scientifically meaningless.”

Wait a minute, I thought that Carl Zimmer in the NYT had proven, using Science, that Senator Elizabeth Warren is vastly more Native American by ancestry than the white American average? According to Carl, only 2.7% of self-identified white Americans have any identifiable Native American DNA, so therefore Senator Warren’s claim to be a Native American is really rather justified. But now we are told that so “much mixing has occurred” …

This is hard to keep straight in my head. I think we need about another several weeks worth of articles keep this topic alive. I suggest: “Why Elizabeth Warren Proves that Race Does Not Exist But Nonwhites Deserve Racial Quotas, You Despicable White Person, You.”

It also explains a distinction between race and ancestry that geneticists say has been muddled by the rise of commercial ancestry tests.

“Although a person’s genetics influences their phenotypic characteristics, and self-identified race might be influenced by physical appearance,” the statement said, “race itself is a social construct,” meaning it has no biological basis.

Read my lips: “No biological basis.” No means NO!

“Black,” for instance, is a socially defined term that includes many Americans who have a majority of European ancestry.

See, if we ignored the people who self-identify as black despite being majority white, then the average differences between the Census’s categories of black and white would be smaller! (Oh, wait, did I get that backwards? … Huh … I hadn’t really thought this through before … Everybody says this all the time so I just assumed it made sense, but now …)

The statement encourages human geneticists to begin engaging with the public on questions of race, ancestry and genetics.

“In public dialogue, our research community should be clear about genetic knowledge related to ancestry and genomic diversity,” it says. “There can be no genetics-based support of claiming one group as superior to another.”

Okay, here is what appears to be the Official Statement from the American Society of Human Genetics:

Genetics demonstrates that humans cannot be divided into biologically distinct subcategories. Although there are clear observable correlations between variation in the human genome and how individuals identify by race, the study of human genetics challenges the traditional concept of different races of humans as biologically separate and distinct. This is validated by many decades of research, including recent examples.

It’s almost as if different races are not different species that can’t interbreed.

So a Malaysian and a Norwegian are just the opposite poles of a gradient. According to Google Maps, it would only take 2,492 hours to walk from Oslo to Kuala Lumpur. Nothing to see here, just move along, folks.

Of course, up through 1491 some of these gradients were more like an unbridged oceans. For example, West Africa and Brazil were only 1600 miles apart but there’s virtually zero evidence of anybody ever crossing the South Atlantic up through 1491.

In this way, genetics exposes the concept of “racial purity” as scientifically meaningless.

It follows that there can be no genetics-based support for claiming one group as superior to another. Although a person’s genetics influences their phenotypic characteristics, and self-identified race might be influenced by physical appearance, race itself is a social construct.

Didn’t you hear what we said: “It follows”? If you can’t follow plain logic like “It follows,” that’s your cognitive genetic weakness, not ours. We understand those two sentences even if you are innately incapable of ever understanding them.

Any attempt to use genetics to rank populations demonstrates a fundamental misunderstanding of genetics.

And that’s why NFL cornerbacks and Olympic 100 meter dash men are so racially random.

The past decade has seen the emergence of strategies for assessing an individual’s genetic ancestry. Such analyses are providing increasingly accurate ways of helping to define individuals’ ancestral origins and enabling new ways to explore and discuss ancestries that move us beyond blunt definitions of self-identified race.

So don’t take anybody’s word for their race before granting them affirmative action racial preferences. Always demand a DNA test!

Never use a DNA test!

Unless you are a Democratic presidential contender. Then DNA tests are Science!