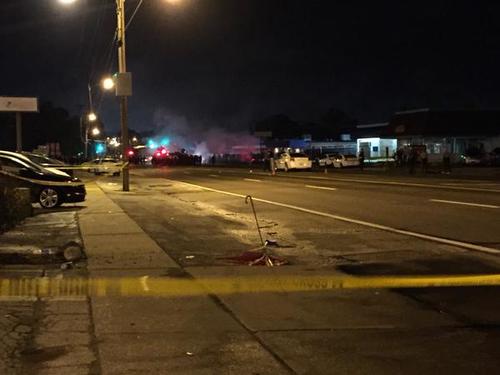 Straight A student on the way to college forced by policeman to shoot someone because racism. https://t.co/VbOTgrFjUm

I saw this yesterday night from conservative Kurt Schlicter, commenting  on a  tweet from Yamiche Alcindor, a USA Today reporter covering the Ferguson anniversary.

Police: Trevion Hopson, 17, went to protests for the death of #MichaelBrown & shot a fellow protester at around 12 am pic.twitter.com/CM8iQmcgQC

Here's a story from a local station:

FERGUSON, Mo. - A 17-year-old boy is now charged with an overnight shooting on West Florissant in Ferguson.

He is expected to be OK.

Police also say Hopson had carried the gun while attending the protests last night in Ferguson.

Hopson is facing two counts of unlawful use of a weapon and one count of resisting arrest.

The story doesn't say whether the person shot by Hopson was white or black, but the Yamiche Alcindor's "fellow protester" implies black on black crime.