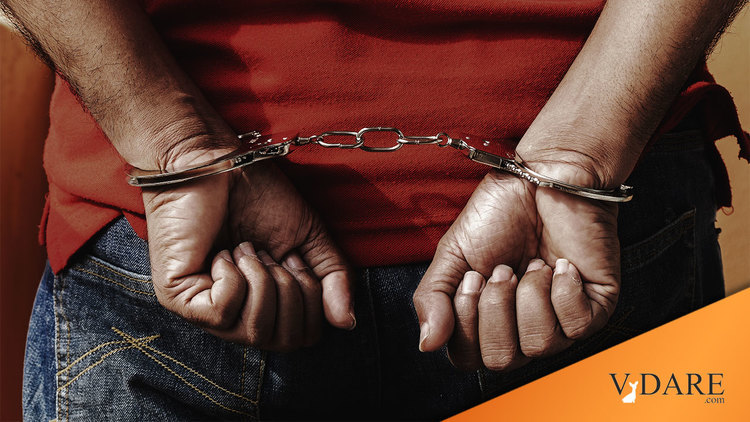 The Majority of Federal Inmates are Black or Hispanic

Earlier by John Derbyshire: The U.S. Needs MORE Incarceration. The U.K., Surprisingly, May Already Have It

Those of us who understand the realities should not be surprised by a recent report by the US Sentencing Commission, which revealed that the majority of individuals in federal prisons are black or Hispanic.

Staff writers at The Crime Report detailed the key points of US Sentencing Commission’s report:

“The majority of individuals held in federal prisons are Black or Hispanic, according to the U.S. Sentencing Commission (USSC).

Nearly half of the federal offenders were incarcerated for drug trafficking offenses—the majority for cases related to methamphetamine, the USSC reported Wednesday.

Offering a snapshot of the current state of the drug war, the data showed that there were 151,729 federal incarcerees as of March 2021, of whom over 65,000 were imprisoned for drug trafficking.

Some 46 percent of the drug offenders were behind bars following conviction for meth offenses, followed by 20 percent for powder cocaine, and 12.6 percent for crack cocaine.

Some 34.9 percent of the incarcerees held by the U.S. Bureau of Prisons (BOP) are Black; and 31.6 percent are Hispanic.

Another 19,473 individuals convicted of violating federal firearms regulations represented the next largest segment of federal prisoners.

The average age of federal prisoners as of March, 2021 was 41 years.

In related data, the USSC reported that 25.2 percent of cases involving federal offenses were subject to mandatory minimum penalties—the majority of which again were for drug-related offenses. For those subject to mandatory minimums, the average sentence length was 138 months [Over 65% of Federal Prisoners are Black or Hispanic: USSC, by TCR Staff, The Crime Report, May 20, 2021].”

Mass incarceration has become a meme in leftist circles, along with dopey right wingers who are convinced they can pick up minority votes by promoting jailbreak policies [Jailbreak Jared and Ivankacare Are Hurting Conservatives, by Daniel Horowitz, Conservative Review, August 6, 2018]. The desire by conservatives to remain clubbable among mainstream circles comes at a massive cost though, as their supporters get clobbered by rising crime and other perils associated with diversity.

Sure, a rational society can debate whether law enforcement’s resources should be dedicated towards weed heads as opposed to violent criminals. But arguing that incarceration policies have an explicit racial intent is on its face ludicrous. It completely overlooks the indisputable fact that non-whites, save individuals of Asiatic extraction, commit much more crime across the board.

In the current zeitgeist, no mainstream political pundit cares about discussing the realities of race. As a matter of fact, they scurry at the mere mention of any connection between race and crime. A society that refuses to acknowledge harsh social realities is one that is destined for decline. The good news is that more and more Americans are waking up to racial realities as the country gradually turns into a multicultural open-air prison.

Pernicious myths can only persist for so long before everyday people start putting two and two together and revolt against their decadent ruling class.