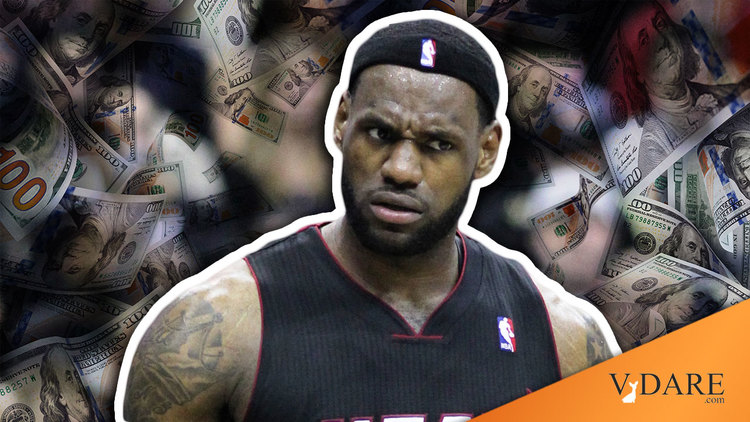 "Black Tax" On Athletes: It's Expensive To Be An African(-American) Big Man

This is reminiscent of Theodore Dalrymple’s experience as a doctor in Africa:

Unlike in South Africa, where salaries were paid according to a racial hierarchy (whites first, Indians and coloured second, Africans last), salaries in Rhodesia were equal for blacks and whites doing the same job, so that a black junior doctor received the same salary as mine. But there remained a vast gulf in our standards of living, the significance of which at first escaped me; but it was crucial in explaining the disasters that befell the newly independent countries that enjoyed what Byron called, and eagerly anticipated as, the first dance of freedom.

The young black doctors who earned the same salary as we whites could not achieve the same standard of living for a very simple reason: they had an immense number of social obligations to fulfill. They were expected to provide for an ever expanding circle of family members (some of whom may have invested in their education) and people from their village, tribe, and province. An income that allowed a white to live like a lord because of a lack of such obligations scarcely raised a black above the level of his family. Mere equality of salary, therefore, was quite insufficient to procure for them the standard of living that they saw the whites had and that it was only human nature for them to desire—and believe themselves entitled to, on account of the superior talent that had allowed them to raise themselves above their fellows. In fact, a salary a thousand times as great would hardly have been sufficient to procure it: for their social obligations increased pari passu with their incomes.

These obligations also explain the fact, often disdainfully remarked upon by former colonials, that when Africans moved into the beautiful and well-appointed villas of their former colonial masters, the houses swiftly degenerated into a species of superior, more spacious slum. Just as African doctors were perfectly equal to their medical tasks, technically speaking, so the degeneration of colonial villas had nothing to do with the intellectual inability of Africans to maintain them. Rather, the fortunate inheritor of such a villa was soon overwhelmed by relatives and others who had a social claim upon him. They brought even their goats with them; and one goat can undo in an afternoon what it has taken decades to establish.

It is easy to see why a civil service, controlled and manned in its upper reaches by whites, could remain efficient and uncorrupt but could not long do so when manned by Africans who were supposed to follow the same rules and procedures. The same is true, of course, for every other administrative activity, public or private. The thick network of social obligations explains why, while it would have been out of the question to bribe most Rhodesian bureaucrats, yet in only a few years it would have been out of the question not to try to bribe most Zimbabwean ones, whose relatives would have condemned them for failing to obtain on their behalf all the advantages their official opportunities might provide.

These considerations help to explain the paradox that strikes so many visitors to Africa: the evident decency, kindness, and dignity of the ordinary people, and the fathomless iniquity, dishonesty, and ruthlessness of the politicians and administrators.

Similarly, John Updike wrote in his 1978 novel The Coup about a Marxist-Islamist dictator of a Sahelian state:

Nephews, daughters-in-law, totem brothers, sisters by second wives of half-uncles greeted Ellelloû, and all in that ironical jubilant voice implying what a fine rich joke, he, a Salu, had imposed upon the alien tribes in becoming the chief of this nation imagined by the white men, and thereby potentially appropriating all its spoils to their family use. For there lay no doubt, in the faces of these his relatives … that nothing the world could offer Ellelloû to drink, no nectar nor elixir, would compare with the love he had siphoned from their pool of common blood.

This is why the U.S. needs a “1618 Project” to inform Americans of the lingering effects of 70,000 years of separate cultural and genetic evolution on race in America today. Harvard geneticist David Reich would make a good chairman.

I always thought that a good college recruiting angle would be for the billionaire funding a college program like Phil Knight at Oregon or Marc Andreessen’s father-in-law at Stanford to offer the mother of some high school superstar that her son can have lifetime use of the billionaire’s own money managers: “I am really good with money and I trust these people to not lose my money.”

It’s probably a violation of NCAA rules, but it could be structured not to be.

Assign to the kid the frostiest most John Houseman Smith Barney commercial-like employee to turn down requests coming from goldbricking relatives: “Your cousin Pookie wants to open a club? I see … Here are 11 separate spreadsheets that he must fill in on the potential financial performance of his club, such as amortization. When he finishes, Mr. Chang (You remember Mr. Chang? A quiet fellow, but with a gimlet eye for dubious amortization assumptions) will be happy to review them with … Cousin Pookie in intense detail.”