The Islamic Republic of Iran Is at War with the United States, but Washington Pretends Otherwise

Islam expert Robert Spencer’s most recent book The Complete Infidel Guide to Iran is an effort to wake the American people up regarding the theocratic state’s threat to the United States. 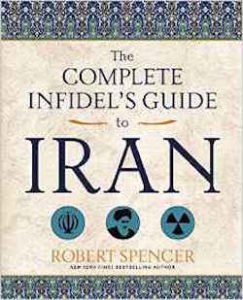 As Spencer has noted, “Iran is what ISIS aspires to be,” namely a jihadist nation dedicated to killing infidels and conquering the world for Islam.

After the terror attacks of 9/11, the United States went to war against Taliban-controlled Afghanistan, because America could not abide the existence of a nation run by Islamists who could use that place as a safe base for launching more attacks. In contrast, under Obama the US has funded the jihad state of Iran.

Spencer uses his brief discussion to illustrate how dedicated the Iran nation is to the pursuit of global jihad and destroying America. Iranian political, religious and military leaders are quoted expressing their loyalty to Islamic principles of world conquest above all else.

Iran is at war with the United States — as demonstrated in recent naval attacks, but our political leaders in Washington pretend not to notice. It’s a dangerous posture to take with a nation poised to become a nuclear armed power.

Robert Spencer here for JihadWatch, a program of the David Horowitz Freedom Center, and for the Center for Security Policy with the truth about the Islamic Republic of Iran: it’s at war with the United States, only the Obama administration hasn’t noticed.

The Jerusalem Post recently quoted the Speaker of the Iranian Parliament Ali Larijani warning the US administration and its House of Representatives and Senate that injurious measures against the nuclear agreement have reached such a point that there is no way left for Iran but to counteract.

As I show in my new book “The Complete Infidel’s Guide to Iran,” Ali Larijani’s bellicose language and thinly veiled threat may have come as a surprise to those who believe that Barack Obama and John Kerry brought peace for our time by means of the nuclear deal, but it was nothing new to those who have been paying closer attention to Iran than the Obama administration has.

When the nuclear deal was concluded, Ali Wambold, a member of the Qajar dynasty that ruled Iran from 1785 to 1925 and a longtime critic of the Islamic Republic, pointed out that the Constitution of the Islamic Republic “proclaims ‘the ideological mission of jihad,’ which it defines as ‘extending the sovereignty of God’s law throughout the world,’ through Iran’s Army and the Islamic Revolutionary Guards Corps.” Thus, he said, “to treat with the Islamic Republic over the particulars of its weaponry while failing to address the very purpose of its bellicosity is delusional. The so-called Joint Comprehensive Plan of Action does nothing to change the fact that, in plain Farsi, Iran is committed to world conquest by Islam, with its clerics as warlords. Those to be conquered include America (the ‘Great Satan’), Israel (the ‘Little Satan’) and the Sunni-led Gulf States.”

Now back in July 2005, the then-president of Iran, Mahmoud Ahmadinejad, had said essentially the same thing: he said, The message of the revolution is global and is not restricted to a specific place or time, have no doubt Allah willing, Islam will conquer what? It will conquer all the mountaintops of the world.”

No less an authority than the Ayatollah Khomeini had said from the beginning that the goals of the revolution were global. Said Khomeini “We shall export our revolution to the whole world until the cry there is no god but Allah resounds over the whole world; there will be struggle.”

The Iranian politician Mohsen Rezaee once told a cheering Iranian crowd, “We will build a force that will demolish the enemies of Islam, continue the path of our great prophet Muhammad and raise the flag of Islam in all corners of the world.”

There’s even a neon sign in Tehran’s Mehrabad International Airport that reads in English, “In future, Islam will destroy satanic Sovereignty of the West.”

Iran’s commitment to world conquest in the name of Islam and to the defeat of America in particular precludes lasting peace with the United States.

According to Islamic Revolutionary Guards Corp Deputy Commander Hossain Salami on February 1, 2014, Israel and the U.S. can be defeated—if only Muslim unity can be achieved. Salami said, “This region is ideologically united by similar faiths and common goals. If these goals can be merged, and the Muslim peoples are ideologically, strategically, and politically united, then Western, and particularly American, political breathing space will be restricted. Even the Zionist regime, which is America’s political, military, economic, and security bridgehead, will have left no air to breathe.” Salami also issued this threat: “Whoever seeks to talk to our nation in intimidating language—we will not be deterred by geographic borders from endangering their interests. Wherever they may be—we will be there as well. We will not confine the conflict to any border. We announce this loud and clear.”

On September 23, 2015, two months after the Iran nuclear deal was finalized, Supreme Leader Khamenei published an article entitled “The Idols Will Be Shattered,” illustrated with a drawing of the Statue of Liberty shattered in pieces. In it he declared, “The idol of the soul, the idol of pride, and the idol of sexual lust; the idol of tyranny and subservience; the idol of global tyranny by which he meant the US; the idol of sloth and irresponsibility; and the other idols that shame the precious human soul—a plan that will spring forth from the depths of the heart will shatter them.”

In a Friday sermon in September 2014, senior Iranian cleric Hujjat al-Islam Sayyed Mohammad Sa’idi declared that Iran’s Islamic Revolution heralded a “new world order”: “Iran’s Islamic Revolution,” he said, “as part of the new world order, has shaken the foundations of the order imposed by the West on Muslim nations. This success is due to the efforts and guidance of the late Imam Khomeini and those of Ayatollah Khamenei.”

According to Iran’s state-run Ahlul Bayt News Agency, “the Qom Friday Prayer leader stressed that the custodians of the old order, with slogans such as freedom, democracy and human rights has attracted some people but that for a long time, Westerners and Americans have based their slogans on deceptive rhetoric. They seek to dominate the intellectual and moral values of the world. However, they have suffered a disadvantage because their slogans have faded and people have found them to be false.”

Freedom, democracy and human rights as far as Iran is concerned — those are on their way out. Islam is coming in to replace them, courtesy of the Islamic Republic of Iran. The confrontation between Iran and the US that the Iranian mullahs so desire has not been canceled by the nuclear deal. On the contrary, the deal has made them bolder and more confrontational than ever.