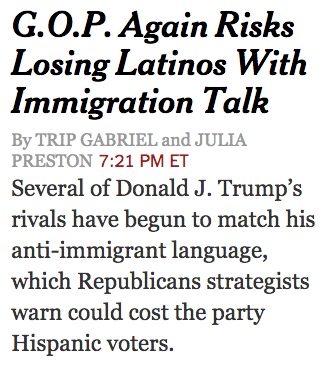 How many times over the years have I read this same article? This may come as a surprise to the editors, but relentless repetition doesn’t make it more sincere..

Concern trolling, by the way, has has been defined as “offering a poisoned apple in the form of advice to political opponents that, if taken, would harm the recipient”.

In Washington, Republicans keep taking steps that imperil their relationship with Hispanic voters, passing legislation to accelerate the deportation of Central American children at the southern border and comparing their influx to a warlike “invasion,” compounding an electoral disadvantage that many in the party are convinced cost them the White House in 2012.

But in a vivid display of the strife within the party over immigration, likely contenders for the 2016 Republican presidential nomination are charting their own, very different course: delivering pointed and personal overtures to the native countries from which millions of Hispanic Americans have immigrated.

Here are a bunch more: However, there is something different in this last piece:

Political analysts keep urging the Republican Party to do more to appeal to Hispanic voters. Yet the party’s congressional leaders show little sign of doing so, blocking an immigration overhaul and harshly criticizing President Obama for his plan to defer deportation for undocumented migrants.

There’s a simple reason that congressional Republicans are willing to risk alienating Hispanics: They don’t need their votes, at least not this year.

Republicans would probably hold the House — and still have a real chance to retake the Senate — if they lost every single Hispanic voter in the country, according to an analysis by The Upshot.

Such a thing would never happen, of course, but the fact that the Republicans may not need a single Hispanic vote in 2014 says a good deal about American politics today.

Why House Republicans Alienate Hispanics: They Don’t Need Them, by Nate Cohn, Oct. 21, 2014

Yes, it shows that there are people on the New York Times's staff who can count. Are there any on the Republican National Committee?