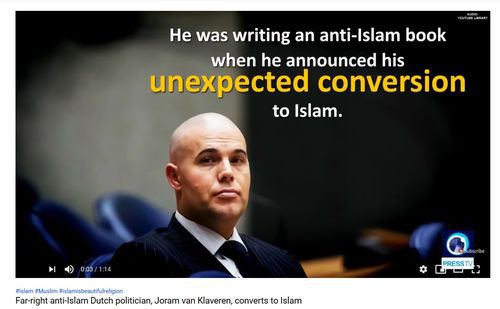 What was once Christendom is certainly not being defended by its own faith leaders, as the creed of the current pope is not much different than that of a reporter from Vice. [Pope Francis in historic visit to Islam’s birthplace urges faith leaders to reject war, by Nicole Winfield and Jon Gambrell, The Salt Lake Tribune, February 5, 2019] Therefore, it's not surprising that some right-wing Europeans are engaging in an act of civilization defection and converting to Islam.

A Dutch former member of parliament and far-right activist who once called the Quran "poison" has announced he converted to Islam while writing a book originally intended to be against the religion.

Joram van Klaveren, an ex-member of the notoriously anti-Islamic Party for Freedom (PVV), told Dutch TV show NieuwLicht that while writing his book, he "came across more and more things that made my view on Islam falter."

"It feels a bit like a religious homecoming for me," he said in an interview.

It's worth noting that van Klaveren was not really all that "far-right" to begin with. He left Wilders's party after Wilders said he wanted fewer Moroccans in the Netherlands, which seems like common sense. The Netherlands is, after all, quite a small country, and there's no reason why there should be a moral imperative for it to absorb more Moroccans.

However, on a deeper level this reflects the pattern described in Michel Houellebecq's Submission. As has been noted before, those disgusted with the spiritually exhausted Western Civilization are going to look for alternatives. This is especially likely when those defenders of the West that still exist, especially anti-Islam campaigners, usually frame their work as a defense of Western liberalism. Of course, liberalism is the "ideology of Western suicide" and liberals do not want to be saved.

As Islam reaches a critical mass within the West, expect more conversions and even the creation of a new form of the faith. A Europe dominated by Islam is practically inevitable unless there this a stop to mass immigration and remigration of Third Worlders. In the end, demographics is destiny, even when it comes to faith.