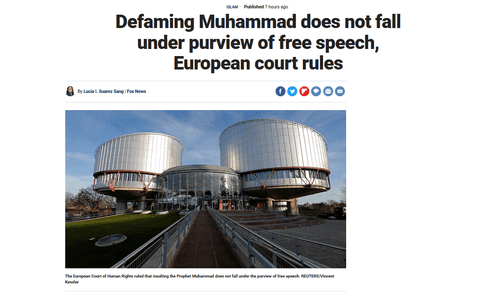 Well, bad news everyone. It looks like Sinead O'Connor has been lost to Christendom. The Irish singer, now calling herself Shuhada, declared conversion to Islam the "natural conclusion of any intelligent theologian's journey". [Sinead O'Connor converts to Islam, BBC, October 26, 2018]

I propose a different theory. It's the natural conclusion of any leftist's journey. Everyone notices how Western feminists and leftists hysterically oppose any expression of traditional Christianity but are quick to defend Islam, even when the latter religion is far more regressive by the Left's own standards. Christianity is still regarded by leftists as "ours" and therefore inherently evil and oppressive, while Islam is the "other" and therefore self-evidently good and worthy of militant defense. The rebellion against own's own identity and history ultimately culminates in the desire to take on an entirely different identity.

Take a much more important development, the decision by the European Court of Human Rights to essentially reinstate blasphemy laws on the Continent. Not to protect Christianity of course, but to protect the Islamic prophet Muhammad.

The freedom of speech does not extend to include defaming the prophet of Islam, the European Court of Human rights ruled Thursday.

The Strasbourg-based ECHR ruled that insulting Islamic prophet Muhammad “goes beyond the permissible limits of an objective debate” and “could stir up prejudice and put at risk religious peace.”

The court’s decision comes after it rejected an Austrian woman’s claim that her previous conviction for calling Muhammad a pedophile, due to his marriage to a 6-year-old girl, violated her freedom of speech.

The ECHR ruled Austrian courts had “carefully balanced her right to freedom of expression with the right of others to have their religious feelings protected.”

The woman, in her late 40s and identified only as E.S., claimed during two public seminars in 2009 that Muhammad’s marriage to a young girl was akin to “pedophilia.”

According to Islamic tradition, the marriage between Muhammad and a 6-year-old girl was consummated when she was 9 years old and he was about 50.

The Court here is also recognizing something of a "heckler's veto," as many Muslims will violently riot to protest insults to the honor of their prophet. In contrast, many Christian churches are not just silent about blasphemy, they'll actively join in.

What is happening is a process of cultural exhaustion aptly described in Michel Houellebecq's Submission. As Paul Gottfried suggests, the book is a "disturbing analysis of the spiritual collapse of Western Civilization and the possibility of Islam as a form of redemption and rebirth." What is clear is that many in the West regard "foreign" religious traditions as far more sacred and worthy of respect than the faith that forged "Christendom." And this powerful self-loathing, and implicit desire to be replaced and extinguished, is also at the heart of the death cult which is driving mass immigration.