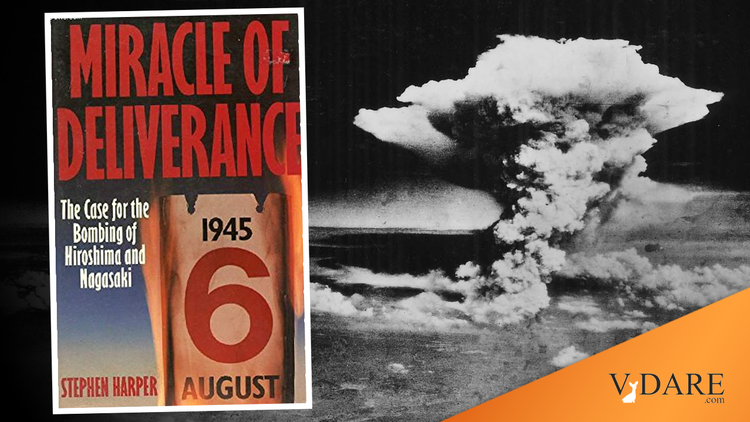 The photo at the right was taken on August 15, 1945, V. J. Day. The enthusiastic young sailor is celebrating the fact that his life has been saved by the unexpected surrender of the evil Empire of Japan.

That unexpected surrender was caused, in turn, by a triumph of science and Western culture–the atom bomb, dropped for the first time August 6, 1945, on the city of Hiroshima. Here are some things we’ve done on that subject.

for details.) Further, the Japanese were occupying almost the entire Far East, victimizing millions of Burmese, Filipinos, and Chinese who were, if anything, even less white than the Japanese.

Obama was one of the Reverend Wright’s parishioners, until he decided he’d rather be President than (stand by) Wright.

“I wanted to do everything that I could to subdue Japan. I wanted to kill the bastards. That was the attitude of the United States in those years.”

“I have been convinced that we saved more lives than we took,” he said, referring to both American and Japanese casualties from an invasion of Japan. “It would have been morally wrong if we’d have had that weapon and not used it and let a million more people die.” [Paul W. Tibbets Jr., Pilot of Enola Gay, Dies at 92, New York Times November 1, 2007]

Tibbets arranged to be cremated rather than have his grave be the site of anti-war protesters.

Fraser, author of the Flashman novels, was one of the young men whose lives were saved by the Bomb. He lived to be 82, and the unknown sailor above may still be alive.