THE HILL: Dems See Amnesty As 2014 Dud. GOP/AdelZucks: Not Amongst Donors! 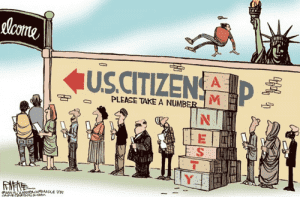 I see Inside-the-Beltway webzine The Hill, which is not sympathetic to the Conservative cause, posted an astonishing article yesterday: Immigration reform fizzles as campaign issue for Democrats By Alexander Bolton - 07/12/14

Immigration reform has fizzled as an issue for Democrats, who are barely mentioning it on the campaign trail despite making the issue their top domestic priority in 2013 and 2014.

Significantly, this is not because of the newly obvious Obamacrat “No Borders” policy. Democrats are agreeing that the Regime’s earlier policies are repulsive to unprivileged Whites.

White working-class voters will play a more important role in the midterm election compared to the 2012 presidential election. They are not energized by immigration reform. Instead, they are concerned about downward pressure on wages, which the Congressional Budget Office (CBO) has linked to higher immigration levels Democratic strategists admit their party’s record on immigration reform will do little to help candidates this year…

“In light of turnout models it’s probably not as strong an issue as it would be in presidential years,” said Steve Jarding, a Democratic strategist…“Republicans are trying to suggest immigration is the reason wages are suppressed…

Ruy Teixeira, a senior fellow at the Center for American Progress…said the real reason for their alienation is the poor economy.

“The ratings have been pretty bad. There’s been a falloff in his approval rating among all demographics but it’s been particularly sharp among white non-college folks,” he said of Obama’s approval rating… Teixeira said white working-class voters are concerned about stagnant wages but they do not connect the problem with higher immigration rates.

Polling by Rasmussen, a GOP survey group, showed working and middle-class Americans oppose large expansions of immigration flows. People earning under $30,000 prefer a reduction in immigration by a 3-1 margin, according to the group’s data.

The most remarkable thing about The Hill essay is that it then proceeds to cast doubt on what VDARE.com calls “Pollaganda”

Polls showing public opposition to higher rates of immigration have been obscured by other surveys — many commissioned by business groups — showing a majority of Americans generally favor immigration reform.

A recent automated survey by Harper Polling of more than 500 likely voters in 26 states found that 86 percent of Republicans and 79 percent of independents say the immigration system needs to be fixed. Majorities also said Congress should act on the issue this year, according to the poll.

But such general survey data often do not distinguish between various approaches to immigration reform such as increasing border security, boosting legal immigration flows and granting a pathway to citizenship for illegal immigrants.

However  for Patriots the money lines in the article are

Despite the lack of concerted effort by GOP leaders in Washington to used immigration reform as a weapon against Democrats, the issue could hurt them among white working-class voters who are slipping away from Obama.

Why should they bother? After the 2010 betrayal?  Consider Breitbart.com’s GOP Establishment: Congress Should Give Obama 'Blank Check' to Address Border Crisis by Tony Lee 12 Jul 2014

Al Cardenas, the Chairman of the American Conservative Union, told the liberal outlet that the border crisis is actually an excuse to pass comprehensive amnesty legislation. He said this is a "crisis in need of a solution, and that's what you go to Congress for." Sen. Lindsey Graham (R-SC) said Republicans should just roll over and not ask for concessions because doing so would make them "get blamed for perpetuating the problem."

Liz Mair, a Republican strategist, told the Huffington Post that Republicans cannot look "unsympathetic to a bunch of toddlers still eating from bottles and wearing diapers" and risk being "deeply offensive to Latino voters" and motivating more of them to vote for Democrats.