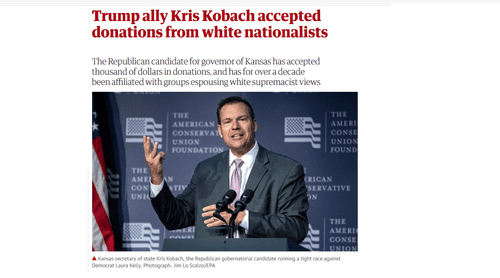 The Republican candidate for governor of Kansas has accepted thousand of dollars in donations, and has for over a decade been affiliated with groups espousing white supremacist views

The groups "espousing"  what the Guardian calls "white supremacist views" are actually Washington think tanks like CIS, and lobbying organizations like FAIR. Kirchgaessner notes a minimal contribution from a PAC associated with Dr. John and Mary Lou Tanton, and then two quite small contributions from private individuals. One of them was ex-National Review writer and ex-Trump Administration official Ian Smith, who lost his job with the administration when the Atlantic published private emails of his showing he was acquainted with Badthinkers.

Another is VDARE.com writer Paul Nachman, who contributed hundreds of dollars.

Kobach’s campaign has also received sporadic small donations of hundreds of dollars from Paul Nachman, who is described by the SPLC as a “Montana-based extremist who regularly writes for Vdare, an overtly racist blog that serves as a hub for white nationalists and antisemites”. The blog is named after Virginia Dare, who is believed to have been the first English child born in the Americas. Asked if he considered himself to be a white nationalist, Nachman responded in an email to the Guardian: “So you think someone who’s Jewish is a white nationalist?”

Paul is a retired PhD physicist (see The doublet-ratio method and interstellar abundances, Astrophysical Journal, June 1973) who has been active in the immigration issue so long that he might as well have a second PhD in patriotic immigration reform. But you see what's happened here—some intern  has  gone down the complete list of Kobach donors, and checked them all for Badthought, as certified by modern-day witch-hunters like the the SPLC and Media Matters.

Well done spotting poor Ian Smith by that method. The number of Ian Smiths must be quite large. (This is his actual name, not a tribute to the democratically elected Prime Minister of former Rhodesia. )

However, there isn't really any story here. In Kobach's run for governor, which is costing about $2 million, the hundreds of dollars don't matter much, although I'm sure the the Kobach campaign sent a thank you note along with a request for more.

It reminds me of the time that Media Matters discoveredd that not only had one Badthinker I'd never heard of given over two hundred dollars to Trump, but Peter Brimelow himself had given four dollars and eighty cents. I'm writing it like that to avoid decimal point confusion—it was really $4.80.

Joint fundraising committees agree to split the proceeds of donations; in other words, the $4.80 the Trump campaign received is possibly only a portion of what Brimelow donated overall. (It’s not immediately clear how much Brimelow donated, as the joint RNC-Trump committee’s quarterly deadline filing is next month.) [More]

Well, now it can be told. Peter Brimelow's contribution to Trump came from him buying a hat online. Here it is, it should look familiar: 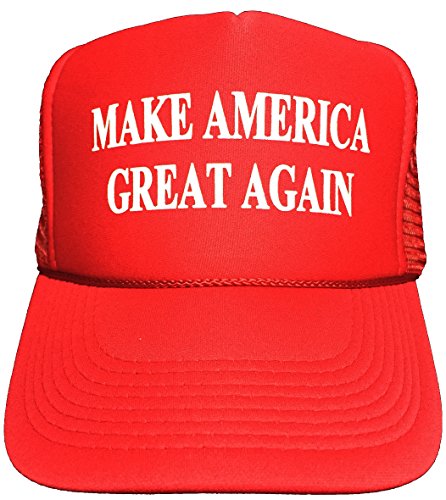 That's the kind of thing that Media Matters is being paid the big bucks to ferret out.