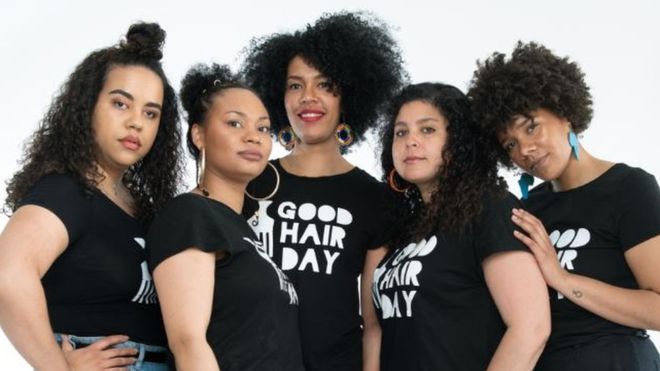 World War H is, of course, the globally escalating conflict over Hair. In brief, the terms of your inevitable surrender in World War Hair are that you must:

Thus, from the BBC:

Afro hair: How black Finns are taking on racism 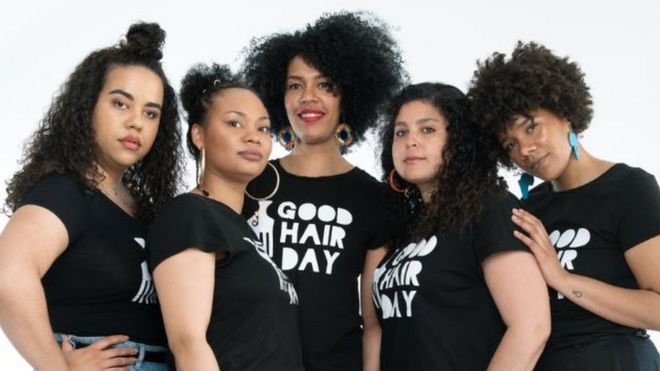 More than 50,000 people with African background live in Finland, according to Statistics Finland.

Michaela Moua is one of them.

Born to a Finnish mother and Ivorian father, she is one of five Afro-Finns behind Finland’s only annual event dedicated to afro hair, the Good Hair Day.

“You don’t see us in the Finnish society. We’re a visible but invisible minority,” she tells the BBC.

The hair event, created to celebrate afro hair, was born four years ago. This year it was held on 24 August.

Ms Moua says the event, which consists of workshops and panel discussions, was born out of necessity.

“We wanted to create an event that not only celebrated afro hair but was also educational and offered advice on how to take care of afro hair – especially for mixed race families,” she says.

Although the event is about hair, Ms Moua says the issue combs deeper.

“Many of us [Afro-Finns] thought for a long time that we were alone and a lot of us felt very lonely. This was a way to bring us together and realise there are more of us than we thought.”

… She says beauty standards prioritise Western beauty ideals and being brown or having afro hair is not seen as beautiful in Finland.

“A lot of us were born here but regardless, society tells us we are not Finnish. Who gets to be Finnish and what does being Finnish mean?” she asks.

Finland, with its relatively small population, has been a trendsetter in many fields since independence in 1917.

However, sexual and gender equality have not translated as easily to race relations.

Isn’t Diversity great? In Finland, one of the weirder cultures of Europe, we see a “Good Hair Day” (with T-shirts in English not Finnish) with the leaders mouthing the exact same talking points, in English, as Oberlin students in America would have used in 2014.

Diversity: It’s turning the whole wide world into one giant Oberlin campus. You can’t get much more Diverse than that!

Please note that the two “B”s in BBC stand for “British Broadcasting,” not Babylon Bee as you might have expected from reading this almost too-perfect article.

Coming soon in Finland: the Helsinki Times’ lauded “1994 Project” documenting how Afro-Finns built Finland from the ground up and thus are absolutely fundamental to Finnish history.