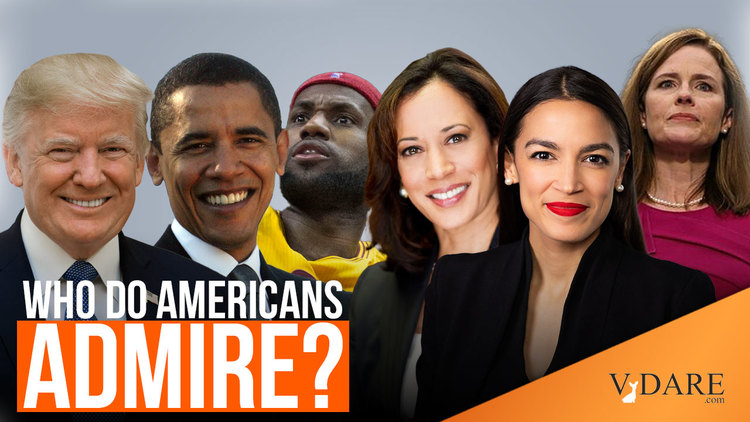 The Demographics of Admiration

The results from the annual Gallup survey of the top 10 men and women Americans admire most tracks fairly closely to the demographics of the country itself. Blacks are overrepresented, Hispanics underrepresented, whites and Asians proportionally so.

If we count Pope Francis as white, which we probably should since he is a second-generation Italian immigrant to Argentina, we get a list that is 65% white. The country is 60% non-Hispanic white. The adult population is a bit whiter still, so that 65% is almost perfectly representative of the country as a whole.

If we count Barack Obama as black, which is what almost everyone perceives him to be, and Kamala Harris as black, which is the racial identity she now tends to lead with, we get a list that is 25% black. Without Harris’ inclusion, the list is 20%. The country is 13% black, so either way blacks are overrepresented.

As is often the case, Hispanics are unambiguously underrepresented. Without stretching to make room for Pope Francis, Alexandria Ocasio-Cortez is the sole Hispanic inclusion. While the list is only 5% Hispanic, the country is 19% Hispanic.

If instead of counting Harris as black we count her as (South) Asian, the list is 10% Asian. If she stays in the black column, the list is 5% Asian. The country is 6% Asian, so like the white figure, the list is in broadly in line with the demographics of the country.

Bernie Sanders is the lone Jewish inclusion. Technically that still qualifies as Jewish overrepresentation, since Jews constitute 2% of the nation’s population, but from a list of 20 it is as diminutive a representation as can be achieved without being entirely absent.

Where there is staggering overrepresentation is by occupation. Those working in politics utterly dominate the list, garnering 11 of the 20 spots. The only inventors to make the cut are Bill Gates and Elon Musk. The rest are religious figures or celebrities.