The Avengers—“A Bunch Of White Guys Saving The World”? Can’t Have That! 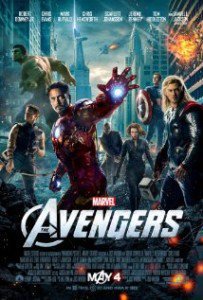 The movie The Avengers, the culmination of a number of different Marvel Comics storylines assembling what Marvel calls “earth’s mightiest heroes” will be upon us May 4. Presaged by five different movies (2008’s The Incredible Hulk and Iron Man; 2010’s Iron Man 2; and 2011’s Captain America: The First Avenger and Thor), it will blow out the box-office and pay rich dividends to those shareholders of Disney—which distributes the movie and which now also owns Marvel.

And yet there is a problem. As I pointed out last year in my book Captain America and Whiteness: The Dilemma of the Superhero, the comic book superheroes who comprise the Avenger team (The Incredible Hulk, played by Mark Ruffalo; Iron Man, played by Robert Downey Jr.; Captain America, played by Chris Evans; the Norse God Thor, played by Chris Hemsworth; not to mention Hawkeye, played by Jeremy Renner) are all white—created at a time when America was an unapologetically a white nation.

Necessarily, all of the above actors are white guys. But they have the opportunity to play action heroes only because the super hero genre, which Hollywood has relied upon since 2000 to garner big returns and develop lucrative franchises, exploits characters like Batman, Superman, Captain America, Spiderman, Iron Man, the Green Lantern that have been long ago established as white.

Now, however, we live in an era when the white majority that made America a land that every individual on the planet wishes to migrate to is under assault—by the very institutions that white people created.

One of the few black actors who will be seen in The Avengers is Samuel L. Jackson (who has a tendency to be cast as the token black character in box office hits, for example Jurassic Park, Pulp Fiction, Star Wars: Attack Of The Clones). He is Colonel Nick Fury, director of the espionage agency S.H.I.E.L.D. He made his debut as Fury in an after-credits scene in the first Iron Man movie.

But in the original comics (set in the 40s and written in the 60s) Fury was a white guy. And in a made-for-television movie back in the late 1990s, David Hasselhoff—Germany’s favorite pop singer!—was Col. Fury.

The current Avengers film is loosely based on the Ultimate Avengers comic that Mark Millar created in the early 2000s, a rebooting of the Marvel franchise set in a more contemporary world. Here’s Mark Millar explaining, in a Marvel spotlight interview available in the hardcover edition of his mini-series Civil War, why Nick Fury went from being a white guy to a black dude:

Spotlight: Nick Fury’s look appears to resemble the actor Samuel L. Jackson. Assuming this is intentional, why the reference to him in particular?

Mark: Well, he’s the king of cool, isn’t he? This goes back to our idea of stripping these guys right back to basics and just finding what made them work. I love Nick Fury like no other. He’s one of my favorite Marvel characters, but the Steranko cool that he imbued on the character was rat-pack cool and very much of the period. Obviously, that’s still in a classic, retro sense, but it means little to a modern kid. Also, Nick Fury just sounded like one of those great, 70s blaxsplotation names. He sounded like an African-American disco super hero or something and we wanted to play around with that too.

Recall that in 2011 white actor Thomas Jane—who played the Marvel anti-hero The Punisher in 2004—was recently deemed “too white’” and not “ethnic” enough to play opposite Sylvester Stallone in Headshot by producer Joel Silver. [Headshot Producer Joel Silver Fires Thomas Jane Because He's White?, MovieWeb.com, by B. Alan Orange, May 27, 2011]

The Christian Science Monitor’s Gloria Goodale, in a boilerplate piece denouncing superhero movies for being too white, did inadvertently produce this telling vignette illustrating the fact that America was until very recently an actual ethnically-specific nation—as opposed to an ideological “proposition nation”:

The legacy of the comic books themselves is partly to blame, says Jacque Nodell, granddaughter of Marty Nodell, the artist who created the first Green Lantern character in 1940.

“He was the child of a Ukrainian Jewish immigrant who knew well the sting of anti-Semitism,” she says, noting that the first version of the hero was blond. “My father was a little harsh about his own dad, but he summed it up when he said that his dad did what he needed to do to put bread on the table,” she says, adding that if that meant selling a fair-haired ideal of middle-American male power, then “so be it.”

Of course, that “fair-haired ideal of middle-American male power” existed because America was 90 percent white. It was brimful of “fair haired” a.k.a. white middle-Americans. Even politically-correct Wikipedia reports that 57.5% of Americans born 1988-1905 had blue eyes—whereas now, as a direct consequence of the 1965 immigration act, only one in every six children born in the U.S. does.

“Let's face it, they are America”—Phillip Roth on white Protestants in American Pastoral, p. 311.

Paradoxically, the so-called Golden Age of Comic Books was replete with Jewish writers like Nodell. They created the beloved characters—all white—that have enabled Marvel and DC Comics to become hot commodities among Hollywood movie companies. Many of their creations had origins in the Jewish experience in foreign lands (Superman being the most obvious). But their creations spoke to a time period and an America that is no more.

Still, white characters like Batman, Superman, Iron Man, the Fantastic Four, the Avengers, Captain America, the Green Lantern, Wonder Woman, the Hulk, etc., do still resonate in our culture. Black characters continue to be exceedingly rare in comics—because those who purchase comic books were and continue to be overwhelmingly white.

As I reported in my earlier article, last year Hollywood went with the original, white Captain America rather than Marvel Comics’s re-engineered 2002 black version (which flopped at the newsstands anyway). And since then George Lucas’ Red Tails, promoting the multicultural myth of the Tuskegee Airman, has, well, bombed catastrophically.

Turning Nick Fury into a black character isn’t the first time that a comic book character has been changed for the sake of political correctness. In 2001’s Justice League cartoon, the Green Lantern character was turned into a black male.

Creator Bruce Timm was quoted in The Atlanta Journal Constitution story at the time:

[Fury] becomes the only major black character in the Cartoon Network’s (CN) regular lineup and one of the very few in any animated series.

Executives at CN, which is part of AOL Time Warner’s Atlanta-based Turner Broadcasting System, said they have sought to have more black characters in general but that they never suggested the Green Lantern character to the team making "Justice League."

Creator and producer Bruce Timm, a sort of star in the confined world of superhero TV animation, said he chose a black superhero “so it wasn’t just a bunch of white guys saving the universe every day.”

It’s an effort that should be undertaken with sensitivity, said Linda Simensky, the network’s senior vice president of original animation. Cartoon characters are by nature extreme personalities, often ripe for mockery. “You don’t want your first lead African-American character on the network to be shown in a negative light,” she said.

The selection has irritated some superhero fans. “On one hand they are mad we aren’t using their favorite version of the character,” Timm said. “On the other hand they are accusing of us of being hopelessly P.C. (politically correct).” ).”[New cartoon series features African-American superhero, Atlanta Journal-Constitution, (pay archive), November 9, 2001]

Inevitably, some film critic—probably Armond White—will soon attack The Avengers for being too white and not offering the approved Crayola Crayon Box lineup of non-white actors.

Just like Bruce Timm said of Justice League, it can’t be white guys saving the world all the time.

After all, the Obama Administration is going to war with the Navy SEALs—not withstanding their success in taking out Osama Bin Laden—because they are “too white.”

Taking out Osama Bin Laden is a more detail compared to the holy case of “diversity”—a.k.a. displacing the historic American nation.