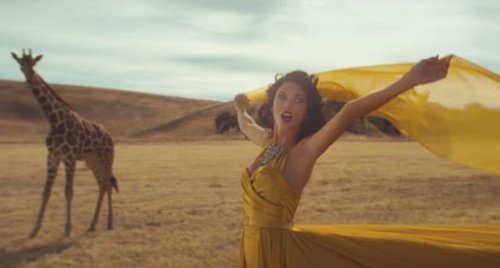 Taylor Swift has been trying her best to appeal to more "vibrant" consumers as of late, but it never seems to do her any good. She's learning the hard way that any kind of engagement with black culture or Africa is automatically racist.

After a blowup a few months ago with escaped laboratory experiment Nicki Minaj, Swift went on to win "Best Video of the Year" at the 2015 Video Music Awards last weekend. Alas, even in triumph, she made a fatal misstep when she premiered her new video, Wildest Love.

This was a crucial mistake because cisgendered White people need to understand that they can't talk about Africa without being racist. If you portray Africa as a Third World hellhole, you are a racist. But if you portray it in a positive way, as Swift does here, you are also being racist.

The racial rent seekers were quick to pounce.

NPR's Viviane Rutabingwa, who has an African heritage [editor's note - and is evidently basing a career on it] said: 'We are shocked to think that in 2015, Taylor Swift, her record label and her video production group would think it was OK to film a video that presents a glamorous version of the white colonial fantasy of Africa.'

She added: 'Swift's music is entertaining for many. She should absolutely be able to use any location as a backdrop. But she packages our continent as the backdrop for her romantic songs devoid of any African person or storyline, and she sets the video in a time when the people depicted by Swift and her co-stars killed, dehumanized and traumatized millions of Africans.

'That is beyond problematic.'

The Daily Dot's Nico Lang wrote: 'An homage to a love triangle about white colonialists is going to present some, uh, challenges to an artist who just wants to make a three-minute music video to put on her VEVO page - and Taylor Swift found that out the hard way.

'Even the most casual observer would have noticed that - for a clip that's set in Africa - it's about as white as a Sunday morning farmer's market.

[Taylor Swift's new Wildest Dreams video is criticized for being 'racist' and based on a 'glamorous white colonial fantasy' of Africa, by Wills Robinson, Daily Mail, September 2, 2015]

Isn't that comment about "white as a Sunday morning farmer's market" kind of racist? Sort of like saying "black as a Section 8 housing lottery." That's a terrible generalization to make.

Notice also how simply stating the current year ("we are shocked to think that in 2015...) is used as an argument in itself.

In any event, now that Africa is free of the hated white imperialists that created a huge population boom and provided the Dark Continent with much of its infrastructure, Africans are desperately trying to flee their liberated homelands in order to live under White supremacy. Colonialism is inevitable it seems, in one form or another.

But Swift is in trouble for channeling a "romantic" image of European colonialism. It is indeed startling to remember that there was a time when vast swathes of African territory were well governed, orderly, and prosperous. The dystopian hellhole now known as Zimbabwe was once Rhodesia, the breadbasket of Africa, before being handed over to Communist thugs at the West's insistence. It's not surprising that the best thing to do is just not bring up these kinds of "problematic" comparisons between past and present.

The fact is, you can't use Africa as any kind of a backdrop without getting in trouble. During the World Cup in South Africa, Shakira made a video entitled "Waka Waka (This Time for Africa)" which was so sentimental and syrupy sweet, I thought it was a parody. (One was reminded of the character of Patrick Bateman in American Psycho trying to make up a plausible Broadway musical, and coming up with "Oh Africa, Brave Africa," which he describes as a "laugh riot.") And yet Shakira was also accused of various forms of cultural exploitation and appropriation. [Undermining African Intellectual and Aristic Rights: Shakira, Zangalewa & the World Cup Anthem, by Dibussi Tande, Scribbles from the Den, May 23, 2010].

But if you really want to watch a video on Youtube about Africa and colonialism, I've got a suggestion.  It's called Africa Addio, and you can watch it on Youtube.

Can't load tweet https://www.youtube.com/watch?v=NHnF85dww3M&feature=youtu.be: Sorry, that page does not exist

Lost in all the controversy is the fact that Swift's video was supposed to help animals in Africa, which was something we were all supposed to care about (remember Cecil the Lion?) But as you'll see above, that kind of care for the environment is another one of those things that you only get under Western rule.

As for Taylor, she's got enough money and fans that she'll be okay. But go the full Trump, Taylor! Have your next video be a love story set at the Voortrekker Monument. Now that would be a Twitter blowup on social media worth seeing.