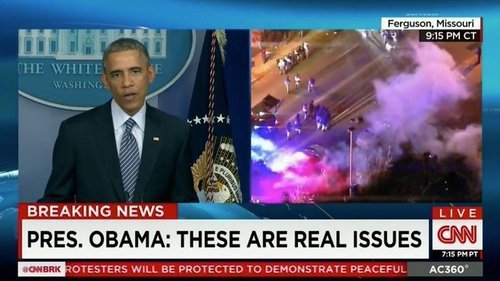 Feds Lynching Ferguson—But First They Fouled It Up, With Section 8 Housing

President Barack Obama celebrated the Civil Rights Movement in Selma on Saturday by saying “abuse and disregard of citizens” in Ferguson could potentially inspire a new movement [Selma civil rights milestone marked by first black president, by Jay Reeves and Darlene Superville, AP, March 7, 2015] He’s right—but not in the way he thinks. The current reality of Ferguson, Missouri is the result of deliberate government policy and the resulting destruction of social capital and property values. Nothing our federal government has ever done has arguably been so destructive to its own people than the imposing of “Section 8 housing”—the low-income housing subsidy program dating back to Lyndon B. Johnson’s catastrophic Great Society—on formerly prosperous and safe communities.

This is precisely what happened in Ferguson. In his savage and dishonest attack on the Ferguson police force, Eric “My People” Holder actually said that the collapse of social capital in the city was what might be called the root cause of the political explosion:

“Of course, violence is never justified. But seen in this context — amid a highly toxic environment, defined by mistrust and resentment, stoked by years of bad feelings, and spurred by illegal and misguided practices — it is not difficult to imagine how a single tragic incident set off the city of Ferguson, like a powder keg.”

But why did this “powder keg” exist in Ferguson? Ferguson was once seen as an exemplar of racial harmony and a model community.

To note one amusing example of how Ferguson was once perceived, East St. Louis High School football coach Bob Shannon, subject of the 1992 bestseller The Right Kind of Heroes, and an African-American, was widely celebrated for his efforts to help his all black-students navigate life in their dangerous community. But he himself would travel home to Ferguson after work “because it's safe.” (p. 188) 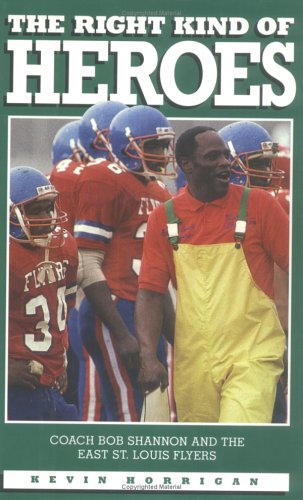 Shannon also noted that Ferguson had what East St. Louis didn’t; a functioning government. As he puts it in The Right Kind of Heroes,

“I want to live in a place where they pick up the trash, where you call the police you can be sure they're going to come. I don't think it's selfish to want to go home and be secure." (p.26)

But that changed. Short explanation: Ferguson today is a community shaped by white flight.

What happened? A key force in this “fundamental transformation” of Ferguson, to borrow a phrase from President Obama: Housing and Urban Development and Section 8 Vouchers.

The data on Section 8 also show that the subsidies have tended to cluster in lower-income areas. Many inner-ring North County suburbs are disproportionately absorbing the tenants who have flocked to aging apartment complexes. That includes Ferguson. A census tract that consists of a portion of Oakmont Townhomes and Northwinds Apartments and stretches eastward into unincorporated St. Louis County had more Section 8 renters in 2013 than any tract in the entire state, according to HUD estimates.

In that area, nearly 20 percent of the 5,000 people who lived there were in Section 8 units. More than half of those households had median incomes of less than $10,000; 57 percent were headed by one parent; and 99 percent were African-American.

According to records from the Housing Authority of St. Louis County, three of the top nine recipients of Section 8 payments from June 2011 to June 2014 were the owners of Park Ridge, Northwinds and Oakmont. Currently, more than 200 tenants in those complexes have vouchers.

And the tenants imported by Section 8 housing and other forms of government subsidies are disproportionately responsible for crime in Ferguson. In recent years, half of all police calls in Ferguson came from a cluster of complexes that include Park Ridge, Northwinds, Oakmont Townhomes, Versailles Apartments and Canfield Green, where Michael Brown was fatally shot by police in August [State treasurer asks for review of subsidized low-income housing in Ferguson area, by Jesse Bogan St. Louis Post-Dispatch, December 11, 2014]

The absolutely predictable result: entire neighborhoods in Ferguson transformed into savage nightmares of crime and violence—an outcome confirmed by the federal government’s own studies.

In reality, crime only follows Section 8 tenants to the suburbs, according to a large body of research, including a 2011 HUD-commissioned study. That's precisely what happened in Ferguson, once a quiet, working-class St. Louis suburb.

Michael Brown grew up in the Section 8 epicenter of Ferguson, a small southeast corner of the city that includes several sprawling apartment complexes catering to subsidized poor renters. That area accounted for a whopping 40% of all robberies and 28% of all aggravated assaults reported in the city between 2010 and 2012, according to local crime data…

Before anyone had heard of Officer Darren Wilson, almost 50 percent of the residential mortgages in Ferguson were already “underwater”—meaning that the amount of money owed on the house exceeded the value of the actual property. Average property values declined by more than a third from the peaks reached last decade [St. Louis is hot spot for 'underwater' mortgages, by Jim Gallagher, St. Louis Post-Dispatch, May 9, 2014].

As businesses are already pulling out of Ferguson, this decline in property values is likely to continue.

And the worst part for Ferguson is that more Section 8 recipients may be on their way. Another wave of recipients are about to receive Section 8 assistance for housing. One indication for how popular this program is: when the waiting list was opened up in 2007, it led to a riot that had to be broken up by police [St. Louis Section 8 voucher waiting list to open for first time since 2007, by Jesse Bogan, St. Louis Post-Dispatch, July 3, 2014].

Recipients of Section 8 are not required to live in the city of St. Louis itself, it is likely that some will find their way to nearby Ferguson. Eric Holder’s “powder keg” is about to receive another spark.

But then, that’s part of the plan. The planned destruction of formerly prosperous white American communities isn’t an example of federal government failure. Like mass immigration and refugee resettlement, it is federal government policy in action.