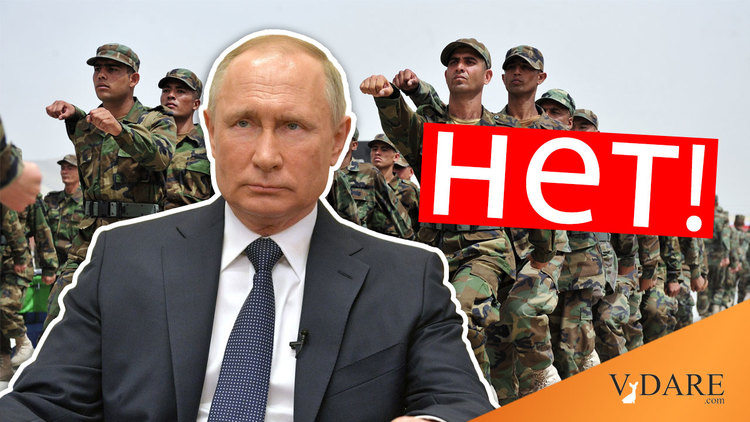 It’s often forgotten that Russia has a massive Muslim population. President Vladimir Putin has thus far managed to prevent that population from rising in rebellion, particularly by handing off Chechnya to Ramzan Kadyrov, once a fighter (like his father) for Chechnyan independence. Unlike America in Afghanistan, Vladimir Putin knows how to pick a proxy who can impose order by whatever means necessary.

However, Vladimir Putin probably also knows that dealing with a restive Muslim population, especially when you are also combatting American sanctions and attempts at regime change, is hard. If you are in a hole, stop digging. Unlike our own foolish (or treasonous) rulers, Russia will not be admitting Afghan “refugees.”

Russian President Vladimir Putin said on Sunday he was concerned that Afghan "militants" posing as refugees might try to make their way into Russia from the Central Asian countries where they're currently being housed.

Putin said he did not want Afghan "militants appearing (in Russia) again under the guise of refugees," reported Reuters.

Putin criticized the United States for asking Central Asian countries, including Kazakhstan, Tajikistan, and Uzbekistan — to temporarily house up to 9,000 Afghans fleeing Kabul  — especially because Russia has no visa restrictions with some of these countries.

"We share common borders, but there are no visa restrictions. Imagine that refugees entered any of these countries. Who is among these refugees? How do we know," Putin said, according to TASS.

This is common sense. Yet it sounds almost crazy because we are so used to our own rulers obfuscating what they are doing with moral blackmail. Notice even the scare quotes in this article.

For many years, we were told we must “fight them there so we don’t have to fight them here.” Now, apparently, we are obligated to bring them here because we fought them there.

At least Russia seems to have learned from its own foolishness in Afghanistan. Unfortunately, I don’t think America’s rulers have.