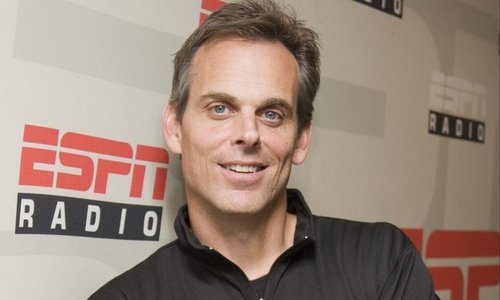 ESPN dropped the radio host Colin Cowherd on Friday, hours after he had clumsily tried to explain comments he made on his show Thursday that seemed to denigrate the intelligence of Dominicans in baseball. …

During his program Thursday, Cowherd questioned those who said baseball was complex. “Like I’ve never bought into that ‘Baseball’s just too complex,’ ” he said. “Really? A third of the sport is from the Dominican Republic.”

ESPN initially said the remarks were “inappropriate,” but later Friday it released a new statement saying Cowherd would no longer appear on the network. …

On Friday, Cowherd excoriated the editing of his remarks. On his show, he replayed his remarks in full; they included his statements that the Dominican Republic lacked “world-class academic abilities” and that “a lot of those kids come from rough backgrounds and have not had opportunities academically that other kids from other countries have.”

Then, to explain his position, he offered statistics from reports by the World Bank and other organizations that outlined education problems in the Dominican Republic.

Here’s an article I found from ten years ago on DR’s levels of educational achievement:

SANTO DOMINGO.- Only 50% of the students who enter the first grade in the Dominican Republic reach to complete just four years, 22% complete the eight year elementary cycle and only 10% finish secondary schooling, figures which place Dominican Republic among the countries with the highest school dropout rates.

By the way, here’s Jason Malloy’s meta-analysis on the handful of IQ studies of Dominicans.

But knowing HateStats, must less mentioning them, is unforgivable. And so he’s gone.

It added, “Colin’s on-air response today addressed the importance of making sure his opinions are fact-based and responsible for all people.”

But not too fact-based.

My favorite Dominican ballplayer of all time was L.A. Dodgers 1980s slugger Pedro Guerrero, who got acquitted on a cocaine distribution charge in 2000 by reason of stupidity. The AP reported:

A former major league hitter was acquitted of drug conspiracy charges Tuesday, after his attorney argued that his low IQ prevented him from understanding that he had agreed to a drug deal.

Federal prosecutors argued that Pedro Guerrero, formerly of the Los Angeles Dodgers and St. Louis Cardinals, told an undercover agent and an informant that he would guarantee payment for a $200,000 cocaine shipment.

But Guerrero’s lawyer, Milton Hirsch, told the jury that the four-time National League All-Star and co-MVP of the 1981 World Series was duped by his friend, Adan “Tony” Cruz.

“He really never understood that he was being asked to involve himself in a drug deal,” Hirsch said.

The jury acquitted Guerrero after four hours of deliberation.

Guerrero, 43, retired from baseball in 1992. Hirsch said he dropped out of sixth grade in his native Dominican Republic, and has an IQ of 70, Hirsch said. The Miami resident can not perform simple tasks, such as writing a check or making a bed, and receives a small weekly allowance from his wife, Hirsch said.