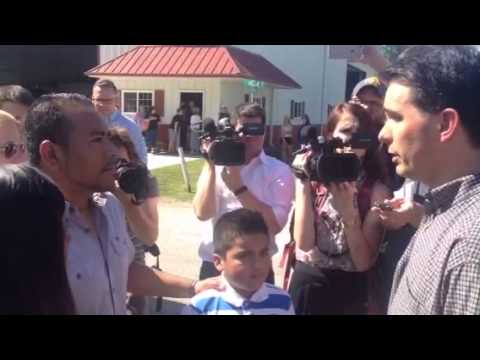 Candidate Scott Walker was confronted by an illegal alien family, which had been brought to a campaign rally in an obvious setup, and he had a good response.

PLAINFIELD, Iowa — As presidential hopeful Scott Walker toured a farm in this tiny town where he lived as a child, he was confronted by an undocumented worker from Mexico who is living in Wisconsin and demanded to know why Walker does not support President Obama's plan to give temporary status to some undocumented workers, including parents of children who were born in the United States. "We're a nation of laws," Walker, the Republican governor of Wisconsin, repeatedly told Jose Flores, 38, who was joined by two of his four children, Luis, 7, and Leslie, 13, who had tears rolling down her cheeks throughout the exchange. Flores, who lives in Waukesha and works for a medical supply factory, said he and his wife live in fear of being deported and separated from their children, who he said were all born in the United States. "My point," Walker said, "is that you have to follow the law, follow the process."

Plainfield, Iowa is a former residence of Scott Walker.

The campaign stop in Plainfield was a joyful homecoming for Walker, who lived in this town of about 400 for seven years as a child in the 1970s..... Walker spoke fondly of buying circus peanut candy at the corner store, swimming in a neighbor's pool and collecting money for a state flag for the city hall. He posed for photos with corn and cows and gushed about Midwestern values.

But the author has to make a contrast with the idyllic Midwestern boyhood of Scott Walker. It's to make the reader feel bad.

It was a childhood quite different from that of Leslie and Luis Flores, who said they worry about their parents being deported.

They needn't worry much about being deported these days. Statistically, the odds are not great.

Leslie Flores, who is in middle school, said her mother was unable to travel to Mexico to see her father before he recently died.

That's sad, but it the parents themselves who put themselves voluntarily into this situation. We make decisions in life, and there are consequences. Americans make decisions about their lives too, and we can't expect the government to bail us out.

The teenager said that she has seen "so many families" torn apart by deportation.

Correction—these "many families" (how many exactly?) put themselves into situations that got them "torn apart'. Besides, family members who weren't deported could go to Mexico and reunite the family, if that's really what's important to them.

The Flores family stood out in the white crowd, a reminder that Iowa towns such as this one and others where Walker has campaigned are not always fully representative of the nation's diversity.

So what's the point of that little snide remark? Is it bad that Iowa is a mostly white state? What's wrong with its remaining a white state?

At first, Walker told the family that he did not have time to talk to them, as he had an interview with Fox News Channel. But the Flores family waited by his campaign bus and approached him again, an exchange that was captured by reporters and three immigration activists, one of whom drove the family to Iowa.

Note that the "immigration activists" drove them from Wisconsin to Iowa to confront Walker. In today's America, a lawbreaking foreigner can confront a state governor and presidential candidate, and come off looking like the victim.

It was an opportunity for Walker to demonstrate how he calmly fights back against challenges from activists. He was forceful as he told the Flores family that immigrants must follow the rules, but he added, "I completely sympathize with the situation you're all in and others are in."

One of the activists, Sam Freeman of Wisconsin's Voces de la Frontera, cut the governor off and shouted, "So that's why you want to separate their family?"

Once again, if these people eventually get separated, it's the parents' fault.

Walker curtly said that he wanted to talk only with the family and that their plight is the reason the United States must go forward with "putting in place a logical system." To address illegal immigration , Walker said, the nation needs to secure the border and enforce its laws before it can focus on other issues. An immigration system cannot come at the cost of American workers and their wages, he added.

It's good that Walker brings up "American workers and their wages'. Walker should make that a a key platform of his campaign, and openly call for a shutdown on legal immigration.

Flores listened intently to Walker and then said, "Now it's my turn."

Think about it, a lawbreaking foreigner gets to confront a state governor and presidential candidate, to make himself look like a victim and promote the cause of the activists who brought him.

In November, Obama announced that he would use his executive authority to shield 5 million illegal immigrants from deportation and allow them to legally work in this country. This become known as Deferred Action for Parents of Americans and Lawful Permanent Residents, or DAPA. Twenty-six states, including Wisconsin, sued, calling the executive action unconstitutional. Such legal action has halted the program.

Flores repeatedly asked Walker why he tried to block DAPA. Walker told him that he is a governor and not part of the federal government or the legal system. Flores said thousands of Wisconsin families could have benefited.

You can watch a video of the exchange below:

Walker's responses were good, as far as they went. But if he wants to compete with Trump, why not emphasize not only illegal immigration, but a SHUTDOWN on legal immigration.

And when he's confronted by a whining illegal alien, tell him to go back to his country with the whole family.