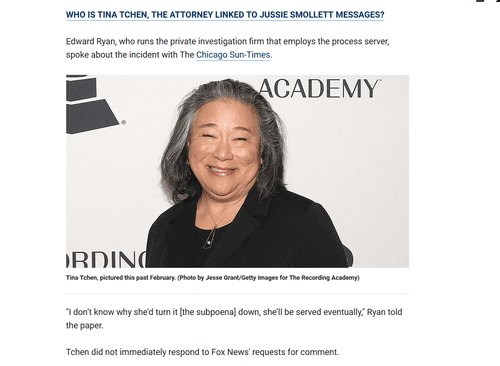 Tina Tchen, the former chief of staff to first lady Michelle Obama, declined Wednesday to be served with a subpoena by a retired Illinois judge seeking the appointment of a special prosecutor in the Jussie Smollett case, according to the process server.

In an email to former Illinois appellate judge Sheila O’Brien obtained by Fox News, the process server wrote that a security guard at the Chicago law firm where Tchen is a partner “called up to her and spoke with her and she said that she in [sic] never going to accept service and to not allow me up to their Law firm.

“She knows all about this Subpoena,” the server added.

Edward Ryan, who runs the private investigation firm that employs the process server, spoke about the incident with The Chicago Sun-Times.

“I don’t know why she’d turn it [the subpoena] down, she’ll be served eventually,” Ryan told the paper.

Tina Tchen is also the Designated Woman of Color hired to purge the Southern Poverty Law Center of the nefarious white male influence that, for better or worse, built the place.