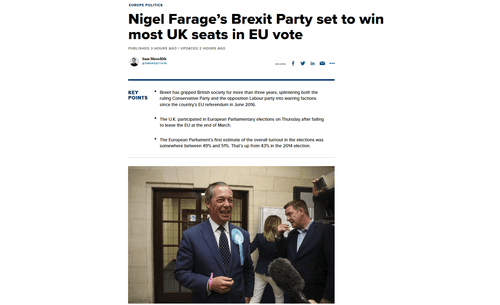 First Impressions On The EU Elections: A Limited Nationalist Victory—But NOT Limited In Britain!

My first reaction on the European Parliament elections is that nationalists have firmly established themselves as a political force in almost every European country. Far from being "fringe parties," many of these parties won a plurality in their countries, defeating the so-called "mainstream" parties. In Hungary, the nationalists won a majority. As an American, I can't but feel somewhat jealous, as we desperately need a political force of this kind.

Unfortunately, tonight also witnessed the rise of the Green Party in countries around the Continent. And the nationalists did not win quite enough to form a large EU group that could challenge the dominance of the usual parties.

It's a complex situation so let's break it up.

The center collapsed but the Green party surged, shocking just about everyone. [‘Green wave’ in EU vote amid climate crisis, by Hui Min, AFP, May 26, 2019] Rather than a nationalist bloc becoming the kingmakers and deciding policy in the EU, it may be the Greens.

There was not a populist surge in Spain, Germany, or other countries. [Pro-EU parties hold ground across the continent, by Alex Barker, Mehreen Khan, and Jim Brunsden, Financial Times, May 26, 2019] Nationalist parties consolidated their positions; from the perspective of 2014, it looks like a huge gain. Yet they did not achieve the huge victories that some polls were predicting. Pro-EU forces have been weakened, but still will be able to push their agenda. [EU elections turnout rises as political landscape fragments, by John Henley, The Guardian, May 26, 2019]

What are the takeaways?