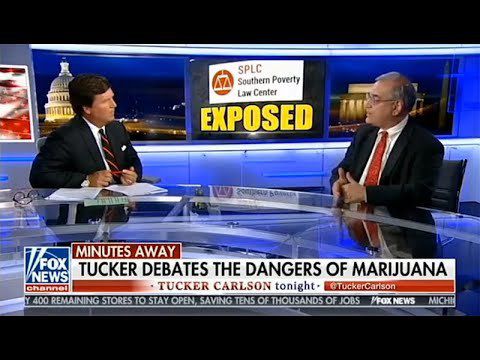 It’s great to hear the evil SPLC is finally being taken on for its crimes against independent thought, especially of persons favoring national sovereignty and immigration law. The Center for Immigration Studies (CIS) is a plaintiff, along with Craig Nelsen, the founder of ProjectUSA which was roasted on a 2001 list of “Anti-Immigration Groups.” See Nelsen’s lawsuit details here.

There is plenty of online pushback against the Southern Povs’ malevolence: for example, the Spring 2018 issue of The Social Contract focused on the SPLC, and included my article, In the War to Defend Western Civilization from Jihadist Islam, the SPLC Sides with the Enemy.

In the conversation below, a successful plaintiff against SPLC was mentioned although not by name: he is Muslim reformer Maajid Nawaz who won over $3 million from the SPLC hucksters. 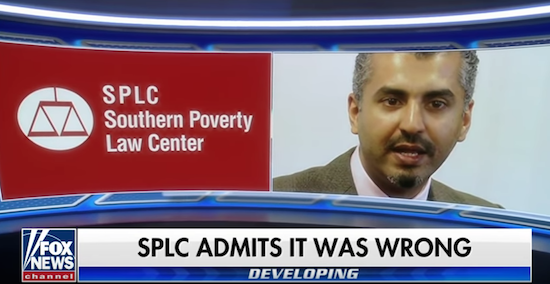 Of course, other people are hopeful that the SPLC gets a major smackdown for the enormous harm it has caused.

TUCKER CARLSON: You’ve heard of the SPLC. It’s a phony anti-hate group that exists to crush people they don’t like, to tar Conservatives organizations as fellow travelers with the KKK or whatever.

Mark Krikorian is Executive Director at the Center for Immigration Studies. His group just sued the SPLC for designating them as a hate group. Finally, someone is fighting back against this. What is the basis of this lawsuit, Mark?

MARK KRIKORIAN: Our attorneys decided the way to go was to file a RICO lawsuit, under the Racketeer Influenced and Corrupt Organizations Act, which is used in the criminal part by, you know, against the Mafia or whatever, by the government.

But there are civil parts where private individuals can file suit. And the basis of the claim is they are committing wire fraud, by falsely describing us as a hate group in order to do harm to my organization.

CARLSON: Has it done harm to your organization being designated?

KRIKORIAN: It’s done some. I mean, we have a reputation and a body of work that makes it hard to plausibly call us a hate group. And we’ve testified before Congress more than a 100 times. We’ve been cited in Supreme Court decisions, published real professors, the work of professors from legitimate universities. Nonetheless, it has, in fact, had an effect. One example that we mentioned in the suit, Amazon has this program where you can designate a non-profit group to get a small amount of revenue every time you buy something.

We were removed from that program. And the person who communicated that to us made the mistake of actually saying what the reason was: in print, he said, we just get our list from the SPLC.

CARLSON: So, that’s what’s remarkable to me; the SPLC is just the Praetorian Guard of the Democratic Party, obviously, fighting for the status quo, seeking to crush anyone who stands in the way of power. But they still seem to be taken seriously by media outlets, and by companies like Amazon. Why?

KRIKORIAN: It’s good question. I’m not sure why. I mean, this is a kind of thing you see a lot in the tech industry, for instance, where they just assume that Progressive political views are just the normal political views, and anybody who doesn’t hold them, somehow, is weird and to be shunned.

And I think that’s part of what it is. You see the same thing with journalism where a lot of media simply cite the SPLC’s hate group designation as just sort of a fact. You know, this person is this old, he’s wearing a blue suit, and he’s been designated as a hate group by the SPLC.

That’s starting to change because they really have overreached, and they’ve gotten slapped down a couple of times. There was a Muslim reformer, a liberal Muslim anti-extremist; they labeled him as an extremist. And he sued. They settled because they knew they were going to lose for $3 million plus. I don’t expect them to go quite that easily in this case. But I think we have a pretty strong case.

CARLSON: You have a very strong case. And I looked at the accusations they leveled against you, because you’re a guest on this show and I was interested, and there’s no basis for saying that about you. It was shocking. It was, I think, it’s libel. But we’re rooting for you, of course.