The headline on SomaliOne.net was Two Somali-American women found guilty of providing material support to Al Shabaab, October 25. 2016. The overseas press puts the fact that their own citizens have been convicted of a crime in headlines.

When the two terrorist-financing ladies (Somali refugees Hinda Dhirane and  Muna Osman Jama) came up for sentencing recently, there was this headline: 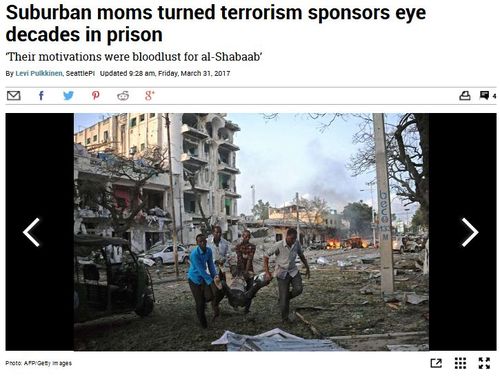 The "moms" say they were just helping out some freedom fighters abroad, they're not really terrorists. The prosecution disagrees:

Federal prosecutors say the women’s claims of higher ideals are undercut by statements they made praising terrorist attacks, including the Boston Marathon bombing.

“The defendants are fervid followers of al-Shabaab ‘clerics’ who exhort their devotees to kill ‘infidels’ – not only abroad, but in the United States as well,” said Gillis, the federal prosecutor.

“It is not hyperbolic to characterize these defendants as vicious, unregenerate, and, until their arrest, active supports of a terrorist organization responsible for the slaughter of innocents simply because the victims’ religious beliefs differed from their own,” he continued in court papers.

In the September 2013, Dhirane was elated on learning al-Shabaab attack on a Nairobi mall that saw about 63 victims killed, children as young as 2 among them.

In another 2013 instance, Dhirane spoke kindly of the Boston Marathon bombing and an al-Shabaab attack on a Somali courthouse that left dozens dead. The attacks, she said, were “blessings.”

“The fact that the defendants were not themselves wearing the suicide vests, shooting the AK assault rifles, or carrying out the attacks is of little moment,” Gillis said in court papers. “They financed the suicide vests and the machine guns; they fed, equipped, and gave shelter to the al-Shabaab fighters as they prepared to carry out their attacks; they provided the machinery that permitted the al-Shabaab fighters to return to kill again. …

“Rather than conform their behavior to the laws of the country that gave them shelter – that would have protected their First Amendment rights even to openly and vocally advocate for al-Shabaab – they gave money at the behest of al-Shabaab ‘clerics’ who exhorted their followers to kill the ‘infidels’ in whatever country they found themselves, including the United States, if travel to fight in Somalia was not possible.”

Trenga, by the way, was the judge who sided with President Trump over executive orders banning immigration from terrorist countries. Apparently he knows something about the immigration/terror nexus that the MSM doesn't. [Virginia Judge Says Trump Order Is Not A Muslim Ban, But Actually Protects Citizens From Terror, by Jordan Schachtel, Conservative Review, March 24, 2017].

The "suburban moms" story above was forwarded by our Linda Thom who said "Love the headline.  Is the MSM picking up this story?"

They're not much—for the Seattle Post-Intelligencer, it's a local story, but a lot of the coverage I found was in 2016, during Hillary Clinton's attempt to defeat Trump for the Presidency. Here are some things the "suburban moms" were called at the time: Reston Woman, Kent mother, Kent woman , Two women including a mother of six , Washington State Woman, and “locals,” as in FBI monitoring locals communicating with ISIS.

If you wanted to see a headline about Somali refugees and Trump during the campaign, it would be: Why Trump warned about ‘Somali refugees’ — and why it could backfire, By Jenna Johnson and Sean Sullivan, WaPo, November 7, 2016.

That was after these particular women were convicted, but the Washington Post writers didn't mention it—probably because they hadn't heard of it either.