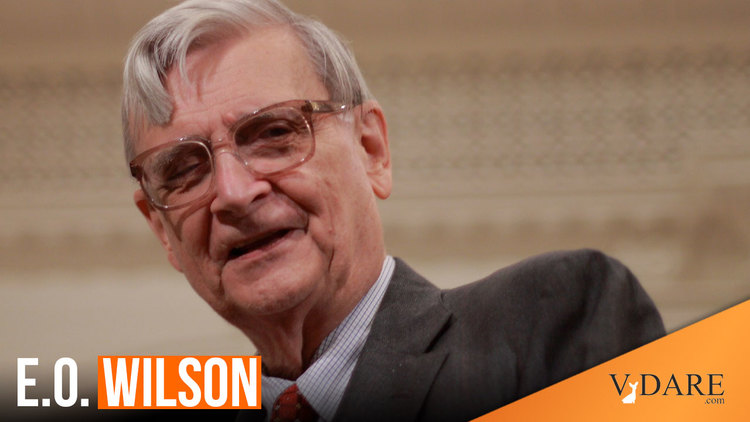 A friend recently recommended E. O. Wilson’s latest book to me as “arguing an updated in-group out-group ethnocentrism thesis,” so read it with a view to what it might contain of interest to VDare.com readers concerned with the National Question.

The Social Conquest of Earth,  Wilson’s twenty-seventh book, is a new popular history of evolution focusing on the origins of sociability, both among his beloved ants and among humans. The work provides more evidence of the growing acceptance among scientists of the hypothesis of group selection, viz., the theory that natural selection operates not only upon individuals but upon the groups of which they are members. Regarding our own species, writes the author:

The pathway to eusociality was charted by a contest between selection based on individuals within groups versus relative success among groups. The strategies of this game were written as a complicated mix of closely calibrated altruism, cooperation, domination, reciprocity, defection and deceit. [As a result,] an unavoidable and perpetual war exists between honor, virtue and duty, the products of group selection, and selfishness, cowardice and hypocrisy, the products of individual selection.

From a nationalist or anti-PC perspective, Wilson’s most interesting admission is that “tribalism is a fundamental human trait”—indeed, this is the title of the book’s seventh chapter:

Experiments conducted over many years have revealed how swiftly and decisively people divide into groups, and then discriminate in favor of the one to which they belong. Even when the experimenters created the groups arbitrarily, and even when the interactions prescribed were trivial, prejudice quickly established itself. [Members] judged their “opponents” to be less likeable, less fair, less trustworthy, less competent. They are quicker to anger at evidence that an out-group is behaving unfairly or receiving undeserved rewards.

This behavior “has all the marks of an instinct” and “can reasonably be supposed to have arisen through evolution.” Its neurological basis lies in the amygdala, the component of the limbic system concerned with fear and anger:

When black and white Americans were flashed pictures of the other race, their amygdalas were activated so quickly and subtly that the conscious centers of the brain were unaware of the response. When, on the other hand, appropriate contexts were added—say, the approaching black was a doctor and the white his patient—two other sites of the brain integrated with the higher learning centers lit up, silencing input through the amygdala.

VDare.com readers should know this already, as it has been discussed here by Kevin MacDonald. (See also White Ethnocentrism.[PDF]) In effect, PC is trying to eradicate our instinctive limbic reactions through mere exhortation. But such an eradication could be achieved, if at all, only by a million years or so of living in a conflict-free utopia and gradually adapting genetically to it.

Wilson’s remarks on genetic blending, on the other hand, seem greatly beholden to PC dogma. He observes, plausibly, that “emigration and ethnic intermarriage have taken over as the overwhelmingly dominant forces of [human] microevolution, by homogenizing the global distribution of genes.” Yet only a few sentences later he somehow deduces from this that “more kinds of genotypes are being produced everywhere.” Homogenizing the global distribution of genes produces more genotypes, Ed?

He goes on to assert that “this change, unique in evolutionary history, offers a prospect of an immense increase in different kinds of people worldwide, and thereby newly created physical beauty and artistic and intellectual genius.” I leave the question of beauty to the reader’s judgment—what is beyond dispute is that Wilson presents no evidence in support of his claim that genetic mixture can be expected to produce new “artistic and intellectual genius.”

Wilson is surely aware that most diversity among domesticated species arises through selective breeding, whereas hybridization reduces phenotypic diversity and may even cause a reversion to the characteristics of wild ancestors.

An analogy among human populations is the Indian caste system. By its prohibitions on intermarriage between castes, it has created and preserved a great number of unique micro-races, making for a human genetic laboratory unequaled in the world. Universal panmixia would be more likely to bring forth a characterless, monotone humanity.

The informed reader will also be suspicious of Wilson’s statement that “infants of hunter-gatherer societies raised by adoptive families mature as capable members of the latter—for example,  Australian aboriginal children raised by white families.” This will surely happen sometimes, but as a blanket statement, it is belied by the average Aboriginal IQ of 62, as well as consistently high Aboriginal crime rates. Yet Wilson goes on to make the extraordinary claim that nothing in the genomes of different populations “prescribes average differences in the deep cognitive processing of language and mathematical reasoning.” Has he never heard of Richard Lynn?

The above is not intended as a complete review of  The Social Conquest of Earth, but merely as a summary of those aspects which relate to PC orthodoxy. Among the other riches the book has to offer I shall mention just one: the author’s decisive rejection of kin selection theory.

This intuitively plausible theory, aka inclusive fitness, seeks to explain sociability (“eusociality”) as a product of kin preference. It predicts that individuals will tend to behave altruistically in whatever proportion their kin share their genes. Thus, a soldier ant will sacrifice itself to defend its own colony, or a mother to protect her brood; in either case, the sacrifice of the individual actually serves to protect the genotype. Wilson himself once defended this theory, but it has since proved to have little predictive value.

An alternative theory—based on what Wilson calls “preadaptations”—has recently been put forward in a paper cowritten by Wilson. [The evolution of eusociality, Nature 466, 1057–1062 (26 August 2010)]

It proposes that eusociality develops from a division of labor which naturally occurs when solitary animals must share a single nest area: one animal takes to guarding the nest(s) while the other specializes in foraging for food. A second important step is the blocking of the instinct which causes females and their offspring to disperse from the nest; this effect has been found to result from a single allele. Once this occurs, a colony of a sort already exists, and ordinary natural selection kicks in to select for all kinds of eusocial traits.

In insects, this process can produce marvels of communistic organization; in humans, it must always contend with the temptation to cheat. Thus Wilson’s famous four word verdict on Communism: “great idea; wrong species.”

Wilson’s co-written paper outlining the new theory has already sent shock waves through the world of academic biology: one hostile response in the journal Nature was signed by over one hundred authors! Wilson’s account of the controversy in The Social Conquest of Earth brings readers very close to the cutting edge of contemporary theoretical biology.