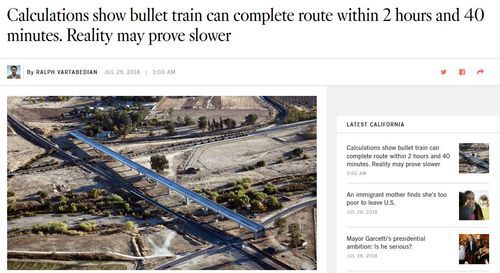 The 2008 California ballot measure authorizing billions in bonds to construct a high speed rail between San Francisco and Los Angeles was a massive bait-and-switch scam. Not only has the budget ballooned from the promised (if obviously absurd) low ball number on the 2008 ballot of $33 billion to $77 billion, but it remains quite unlikely that the bullet train can hit it’s legally promised downtown to downtown duration.

There is an obvious tradeoff between speed and cost. Less obviously, the tradeoff isn’t linear as speed increases. Going a little bit faster costs a lot more money. By way of analogy, about two decades ago the Volkswagen CEO decided that VW would build a 250 mph / 400 kph hypercar, the Bugatti Veyron. There are lots of 200 mph supercars and plenty of 150 mph luxury sedans and hundreds of millions of cars that can hit 100 mph, but nobody had ever made a production vehicle that would go 250 mph.

It turned out that there are good reasons for this. The engineering alone cost an immense amount and the individual car had to be priced in 7 figures. I live in Los Angeles, where there are a lot of Lamborghinis, but I’ve seen maybe two Veyrons in my life.

Anyway, the individuals backing the California bullet train lowballed the price and highballed the speed to swindle the voters. Why aren’t they being investigated for that?

When California voters approved construction of a bullet train in 2008, they had a legal promise that passengers would be able to speed from Los Angeles to San Francisco in two hours and 40 minutes. …

The authority says it can still meet its trip time commitments, though not by much. …

Such a tight margin of error has some disputing whether the rail network will regularly hit that two-hour-40 minute time, in part because the assumptions that went into those simulations are highly optimistic and unproven. The premise hinges on trains operating at higher speeds than virtually all the systems in Asia and Europe; human train operators consistently performing with the precision of a computer model; favorable deals on the use of tracks that the state doesn’t even own; and amicable decisions by federal safety regulators.

In other words, the mandated 2 hours and 40 minutes could be achieved by tolerating a greater chance of a catastrophic derailment

The California bullet train would have to average 164 mph, vs. 145 mph for the Japanese one and 119 for the French one….

One fundamental problem for the California system is that it’s at the upper end of the distance where bullet trains can compete effectively with airlines, so it has to be as fast as possible.

Top speeds require precise track alignment — straight and level. A curve that allows a train to operate at the max speed of 220 mph would have a circumference of more than 50 miles, were it to make a complete circle. Going over mountains requires deep tunnels to level out the climb so that the grades are half as steep as those on interstate freeways. …

The speed mandate was created by a small group of political staffers and bureaucrats huddled in a Senate conference room in spring 2008. They believed guaranteeing high speeds was critical to the future success of the system and to convince voters to back a $9-billion bond later that year.

The main proponent of mandating the trip times was Mehdi Morshed, the longtime chief executive of the rail authority who believes rail speeds would be endlessly compromised were they not backed up by law.

Shouldn’t there be legal sanctions against people who use the initiative system for bait-and-switch purposes?

The notion that the NIMBYists of Silicon Valley were going to allow HSR to roar through Palo Alto at 220 mph was always delusional:

In 2011, the rail authority faced growing opposition in wealthy Silicon Valley communities about an elevated viaduct that would carry 220-mph trains. In a deal with Bay Area elected officials, the state agreed to put the bullet train on ground-level tracks shared with much slower commuter trains between San Jose and San Francisco. …

The computer simulations that are supposed to prove the validity of the trip times are based on a lot of hope.

One key assumption is that trains will move through the urban Bay Area and Los Angeles nonstop, even while sharing track with trains that make multiple stops at stations along the way.

It would involve using parallel tracks, which only exist along limited segments of rail, to bypass commuter trains, Vacca said. During rush hour, the puzzle would require as many as four bullet trains to weave around six commuter trains per hour while relying on a sophisticated new signaling system.

Caltrain commuter trains in the Bay Area may have to sit idle for up to seven minutes while bullet trains pass by, according to a 2016 rail authority planning document prepared by a Swiss consultant. Caltrain officials said there is no agreement on such future movements on the track, which Caltrain owns.

The trains would also have to sail through Fresno, Bakersfield, Palmdale and other communities at 220 miles per hour, speeds that have triggered a public backlash in Europe, said Lisa Schweitzer, a USC professor who specializes in transportation.

“I can’t imagine most communities would agree to trains operating at these speeds,” she said. …

Another key assumption is that trains on shared track would get federal approval to pass through at-grade crossings in dense urban areas at 110 mph, requiring sophisticated crossing gates to prevent crashes. While there are a few areas on the Amtrak’s Acela service along the East Coast that have such speeds, they are in rural areas.

A general lesson is that while California could accomplish heroic civil engineering projects like the state aqueduct when the population was only 16 million in 1960, it’s much, much harder to do similar things when the population is 40 million and rich liberal Californians have led America for the last 50 years in pioneering legal roadblocks, such as environmentalism, to protect their neighborhoods from the needs of the masses.