Singaporeans Rally on May Day for Immigration Limits

On a day when thousands of foreigners in America took to the streets to demand amnesty, Singapore citizens rallied against the government’s plan to import foreign workers to support the city-state’s aging population. The people don’t want the social engineering; they want to maintain their own culture. This behavior is a normal expression of human nature, to like their own tribe the best and want to preserve it. 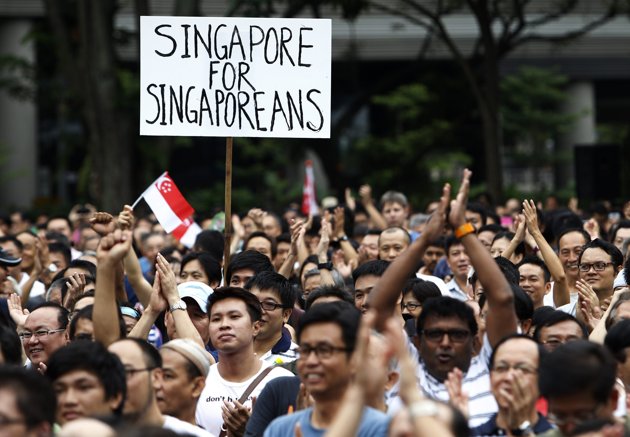 Mass immigration is not a popular public policy the world over, as shown by polls like Ipsos and Pew, which is why the liberal press promotes it daily to bend the public will.

Not only do Singaporeans not want the foreign workers, they don’t desire the additional crowding to the current 5.3 million people. The government plan is to increase the number of residents to 6.9 million by 2030, with half of that to be foreigners. Singapore is already one of the most densely populated states on earth, ranked at #3 on one analysis behind only Macao and Monaco, but the government managers believe they can cram in over a million more in the city-state’s 274 square miles.

A huge crowd turned up at the Speaker’s Corner at Hong Lim Park Wednesday afternoon to again protest the government’s plans to let in more immigrants to counter Singapore’s ageing population.??Wire agency AFP estimated the crowd reached 3,000 people though event organiser Gilbert Goh eventually put the final number between 5,000 and 6,000.

The protest on the grey-cast, drizzly day was organised as a sequel to the first protest in February, which was one of the largest protests held in the city-state. That event held in a light drizzle drew about 4,000.

In his opening speech at about 4pm, Goh of transitioning.org, a support site for the unemployed and the event organiser, said more protests would be held at the park.

As the crowd swelled, he also asked attendees to wave their pink identification cards to show they were not foreigners, as non-Singaporeans were discouraged from attending the event.

He explained that he felt he had to organise the protest after seeing well-educated Singaporeans reach their 40s and 50s without good job prospects.

“I am not against foreigners but we are against the policy of allowing a company to hire 100 per cent foreigners,” he said.

Anti-foreigner sentiment has been rising in Singapore with many citizens blaming immigrants for pushing up the cost of living, taking jobs away from locals and straining infrastructure.The first protest in February was a backlash to a government white paper projecting that Singapore’s population could increase to as much as 6.9 million in 2030 with almost half of the number made up of foreigners.

Muslim activist NIzam Ismail earlier this week backed out from speaking at the event, saying the move was “a personal protest against untruths on my purported political objectives”.

Last week, Nizam quit as director of the Association of Muslim Professionals over alleged government pressure for him to curb his critical views.

When it came his turn to speak, lawyer M Ravi, who last year represented a client in challenging the prime minister’s discretion to call for a by-election, discussed the wide income gap and lack of protection for human rights in Singapore.

He noted that Singapore was one of the founders of the Association of Southeast Asian Nations but while other member states have human rights commissions, the city-state does not.

He said that the government, employers and trade unions were supposed to protect workers’ rights, but the three-way arrangement has been “ineffective”.

He also said population growth in Singapore “increases poverty and causes unequal distribution of wealth”, citing that the country has one of the widest income gaps in the world.

Wham, executive director of Humanitarian Organisation for Migration Economics (HOME), said he had also come to realise that Singapore has one of the highest income inequality rates in the world, and that people needed to speak up.

“The poor may not dare to speak up and make themselves heard because they find thatit is shameful,” he said.

He also pointed out that what poor families in Singapore need are not handouts but “a decent wage with decent hours and decent working conditions”.

Leong, former president of the Society for Financial Services Professionals, said that Singaporeans have been told over and over again that to have higher wages there had to be good economic growth.

He estimated, however, that during the past dozen years, over which Singapore’s economy has grown, the real growth in the median wage excluding employer’s CPF contribution was only 0.4 per cent per annum.

In his speech, Tan Jee Say, who lost in the four-way presidential race in 2011 with the third-highest share of vote, had harsh words for the ruling People’s Action Party, and urged opposition parties to aim for a coalition government.

The population white paper, he said, was a way for the PAP to tighten its grip on Singaporeans with the help of new citizens.

“If PAP has the interests of Singaporeans at heart, they will do what other cities do in tackling the issues of an ageing population and low fertility rate,” he said.??He clarified that he was not against foreigners in Singapore but rather the government policy of continually importing foreign workers.

“We can understand why new citizens are grateful to the government but gratitude is not servitude. Do not vote PAP just out of gratitude because gratitude is about the past, not the future,” he said.??Regarding the political landscape, Tan noted that the opposition was more ready than the PAP was back in 1959.??Singapore’s most popular opposition party, the Workers’ Party, earlier this year cautioned against reading too much into its candidate’s decisive win in the Punggol East by-election and that it was not ready to form the next government.??”In 1959, the PAP only had one PhD, the late Dr Toh Chin Cye. We in the opposition today have seven PhDs, of whom three are associate professors. We have several doctors, lawyers, ex-bankers, corporate executives – together, there are at least 25 to 30 of us with a wide range of expertise to run an effective, competent and caring government,” Tan pointed out.