For some reason, the pollsters over at Pew Hispanic thought Mexican public opinion regarding America would be worth measuring. Perhaps it was published to reflect Obamas Thursday taco junket to visit the new Mexican president on his home turf (n.b. Key issues on Obamas Mexico trip: Trade, immigration and drug war).

Anyway, wouldnt it be better for Mexicans to dislike America, particularly if the feeling dissuaded them from relocating here? A report of positive attitudes on the part of Mexicans is not reassuring.

Plus, it is revealing that Mexicans opinion of the US is up considerably from three years ago when Arizona enacted its own immigration enforcement law. That finding suggests that Mexicans see the United States only as a sponge for its excess citizens, and that it is their right to move here at will because they regard the southwest as belonging to them.

When U.S. President Barack Obama travels to Mexico this week, he will encounter a Mexican public that has far more positive attitudes about the United States than at any time in the last several years.

America’s image south of the border fell sharply in 2010, when Arizona passed a “show me your papers” law aimed at identifying, prosecuting and deporting immigrants who are in the U.S. illegally. But Mexican views have rebounded since then, and U.S. favorability ratings are now at their highest point since 2009. The prospects for U.S. immigration reform may be, at least in part, the source of renewed Mexican approval of their neighbor to the north.

A new Pew Research Center poll found that 66 percent of Mexicans have a favorable opinion of the U.S., up 10 percentage points from a year ago and up 22 points from May 2010, immediately following the enactment of Arizona’s immigration law. The last time America’s image was as strong among Mexicans was in 2009, when 69 percent said they had a favorable opinion. [. . .]

Doesnt anyone in the polling universe care about what Americans think of Mexico and its demanding inhabitants? Particularly since Mexico is largest sending country of immigrants by far. A search of the handy internet turned up a survey from the National Journal last November, expressed rather cleverly.

The word cloud below answers the survey question, “Now, thinking about Mexico, what are three words that come to mind?” 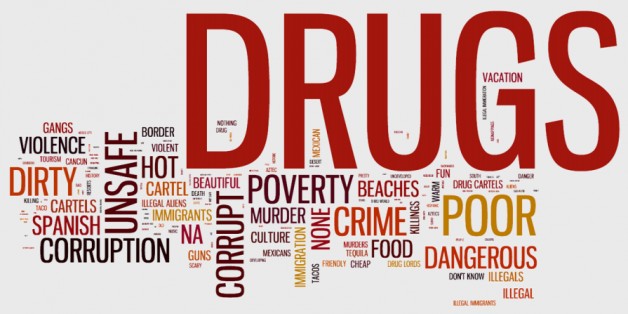 As the newly elected Mexican president travels to Washington next week, a new survey released by consulting firm Vianovo on Monday underscores the startling challenges Mexico faces with its international image, especially in the U.S.

The survey highlights what has been widely assumed: that Americans have a generally unfavorable view of Mexico. But while illegal immigration and border crossings may be at the forefront of concerns in the Southwest, drugs and corruption are the ringing concerns of most Americans.

“Drugs” was the word most often used to describe Mexico by those surveyed, as is stunningly illustrated by the survey’s word cloud. Additionally, 72 percent cited drug cartels and traffickers as the main reason behind their negative perception of their neighbors to the south.

Of those surveyed, an astounding 72 percent of Americans think Mexico is unsafe for travel and only 17 percent consider the country to be modern.

This correlates with Americans’ overall view of Mexico, which ranks near the bottom among 10 other countries that were part of the survey. Ranking third-lowest, with 50 percent of Americans holding an unfavorable view of Mexico, the country hovers around the levels of Colombia and El Salvador. Meanwhile, Brazil, an economic rival of Mexico, is seen more positively among Americans.

The root of Mexico’s image problem in the U.S. comes largely from the negative news stories emanating from south of the border. Among those surveyed, 81 percent say news they have heard in the last month was related to drug problems and cartel violence. Further, with the death of a U.S. Border Patrol agent and other issues surrounding the border, the negative image is only perpetuated.

This links to the 59 percent of Americans who said Mexico is a source for problems in the U.S., while only 14 percent said they were good neighbors.

Americans, however, do find a distinction with regard to geography. The most unsafe areas of Mexico, according to the survey, were border cities and Mexico City. Cancun, on the other hand, had an overall positive perception.

In President-elect Enrique Peña Nieto’s meeting with President Obama in the White House next week, these issues, along with the continued economic partnership between the two nations, is likely to be the focus of conversation.

The poll was conducted with 1,000 U.S. adults between Oct. 3 and 7 in partnership with GSD&M, and has a margin of error of 3.9 percentage points. Those surveyed were asked about Canada, the United Kingdom, China, Greece, Russia, Brazil, Saudi Arabia, Turkey, Mexico, Colombia, and El Salvador.