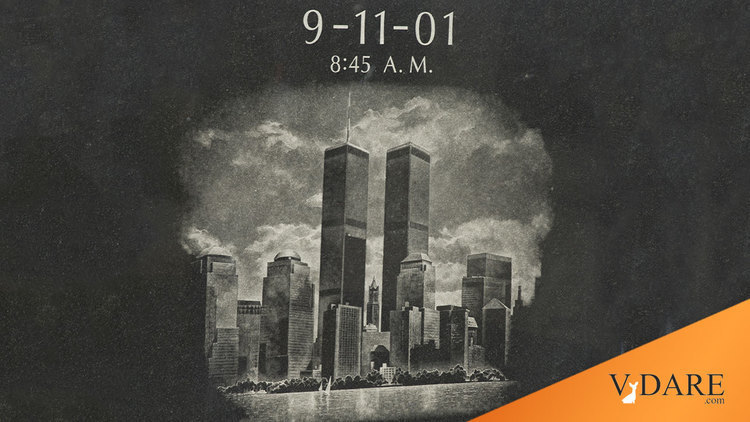 Like most people, I can remember where I was when I heard about the attack on the World Trade Center—I was already working here—and I also remember writing about what might be done to prevent a recurrence. In the event, nothing was done in America to respond to the threat of Muslim terrorists. Pilots are still unarmed, cockpits frequently open to passengers, and immigration from Muslim countries continued unabated. Nothing was allowed to be done, because America’s ”Great and Good” considered ”crazed rednecks”—white Christian Americans—more of a threat than Islamic terrorists.

Here’s what VDARE.com editor Peter Brimelow wrote about The Irrelevance Of 9/11 in 2007.

I went upstairs and told Maggy, ill in bed with the cancer that was to claim her life just 17 months later. Together, we watched the utter destruction of an area we’d both known so well when I worked for Alan Abelson’s Barron’s Magazine some 20 years earlier.

The same eerie feeling of complete change and no change comes over me when I contemplate the political consequences of 9/11. Osama bin Laden, whose head could surely have been obtained through a traditional commercial transaction with one or other local warlord, remains irritatingly at large. The government of Afghanistan, taken from the majority tribe and given to minority tribes, is obviously reverting, amid the usual chaos. Iraq continues to be the object of Washington’s intense attention, as it has been since the first Gulf War, for reasons that deserve analysis but manifestly had nothing to do with 9/11. Domestic terrorism in the U.S., which could have been as serious as the Irish Republican Army’s recent bombing campaign in Britain (why no War On Terror against them, by the way?) mysteriously did not materialize - even though episodic outbreaks of Immigrant Mass Murder syndrome have shown how easily individuals with rifles could paralyze the country. Above all, the Bush Administration continued with its fanatical drive to accommodate the Mexodus, heedless of border security.

I find I don’t feel like writing a VDARE.COM reflection on 9/11 this year. It’s a game. America’s elites didn’t really care. They just got on with their agenda(s).